Activision Blizzard employees have signed a petition to remove CEO Bobby Kotick from his post. According to the reports, this is because of the complaints and scandals that the company is currently facing.

Petition for Bobby Kotick To Resign

In recent months reports of misconduct and inappropriate behavior have plagued Activision Blizzard. 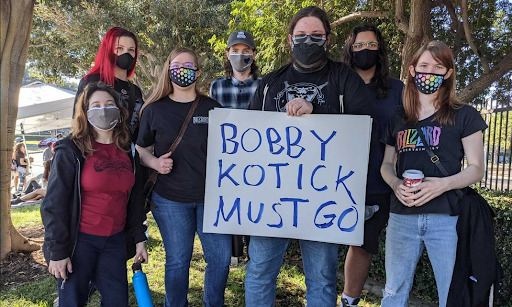 The complaints are threats of violence, harassment, bullying, sexual misconduct and bullying.

The accusations are not in accordance with the recent post that Kotick promised to his employees saying that he promised to “create the most welcoming and inclusive workplace”.

Included in the message is the company’s dedication to move forward without any tolerance for inappropriate behavior.

The complete message is available here.

Employees of Activision Blizzard do not believe that Kotick is able to lead the company in the right way. What they did is they staged a walkout and signed a petition for the CEO to resign.

The petition reads: “We, the undersigned, no longer have confidence in the leadership of Bobby Kotick as the CEO of Activision Blizzard. The information that has come to light about his behaviors and practices in the running of our companies runs counter to the culture and integrity we require of our leadership–and directly conflicts with the initiatives started by our peers. We ask that Bobby Kotick remove himself as CEO of Activision Blizzard and that shareholders be allowed to select the new CEO without the input of Bobby, who we are aware owns a substantial portion of the voting rights of the shareholders.” 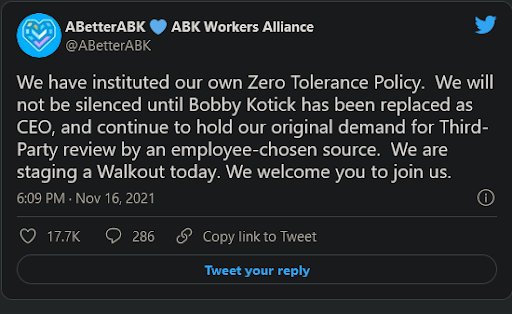 As of this post, there are almost 1800 signatures in the petition already. The complete list of names is available here.

Doug Bowser, the president of Nintendo America says that what is happening to Activision Blizzard is “distressing and disturbing”.

Bowser wouldn’t want that to happen to Nintendo and promises an open and inclusive company.

He also added that they were able to contact Activision and are taking “action and are assessing others”.

Whatever actions Bowser is referring to is not clear. However, he clarifies that Nintendo is strengthening its stance against abuse and harassment in the workplace by working with the ESA.