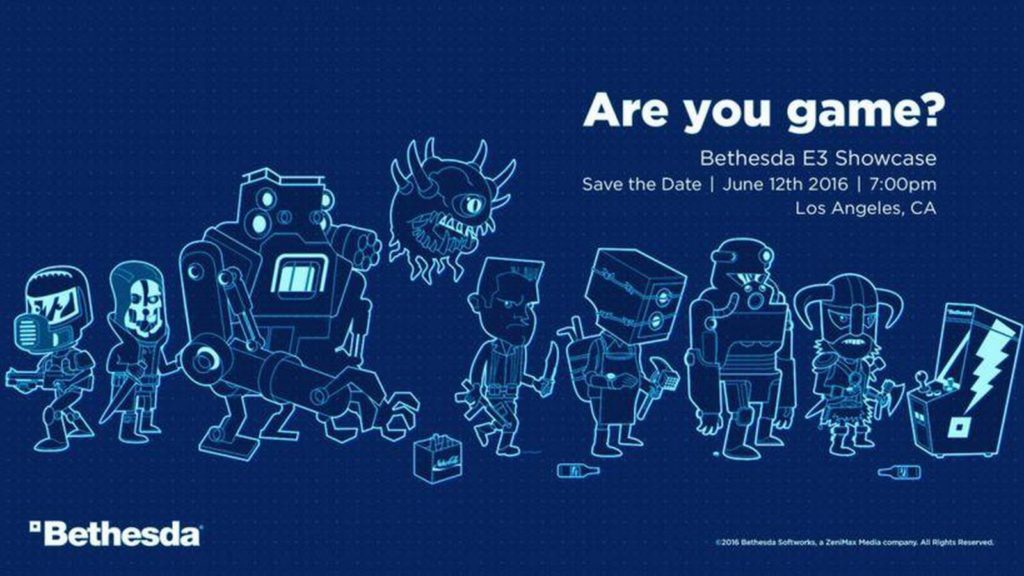 To open the reveal is a performance from rock star Andrew W.K then the Rage 2 footage was played. Rage 2 is the upcoming open-world, post-apocalyptic shooter that was co-developed by id Software as well as Avalanche Studios — who is known for their huge open world games like the Just Cause series.

Check out the Rage 2 gameplay feature below:

The digital card game of Bethesda that is based on The Elder Scrolls franchise will be getting updated visuals and will be available for Xbox One, PlayStation 4 and Switch later this year.

You can check out the new graphics below:

There will be two upcoming DLCs for the Elder Scrolls MMORPG. As ZeniMax announced, the first one will be a DLC about werewolves called Wolf Hunter. The next DLC which will be releasing later this year is Mirkmire and it will bring players to the Black Marsh in order to learn more about the Argonian lore and culture. For right now there are no specific release dates available for both DLCs.

A brand new DOOM game will bring hell on earth and it is called DOOM Eternal there will be double the number of demons and is a much harder game. The game will make its official debut on August at this year’s QuakeCon. Check out the teaser played during the show:

The original eSport, as they claim to be, Quake Champions will have more competitions for the game. There will also be new features added to make it easier for friends and family to play the game together. A free-to-play version is available this week and anybody can sign up and start playing right away. What’s great about this is that if you download it during the week, the game will be free to play up until the launch of the game. Get to watch the latest trailer for the shooter.

During the Bethesda announcement of Prey, a new update had been released for the game. It will now include additional modes — a Story Mode, New Game Plus, and Survival Mode. Along with all these is a new infinity replayable DLC called Moon Crash. Every playthrough in this DLC is unique and players will be attempting to escape from the moon. There will be enemy changes, changing environmental conditions and the possibility of dying a lot is real. Check out the DLC trailer below:

Another DLC will be on the works and it is called Typhoon Hunter. This is a hide-and-seek multiplayer experience where 1 player will go against 5 others who will play as mimics. A VR version of this DLC is also available which includes a single player mode that is focused on puzzle solving.

The next Wolfenstein game will feature BJ’s twin daughters and it will be a co-op shooter. The game can be played alone or with a friend. Not much had been revealed through and you can check out the teaser below:

Also, another Wolfenstein game had been announced called the Cyber Pilot. It is a VR game where players are able to take the role of a hacker and take over the Nazi robots in order to turn them against their masters.

Fallout 76 is a game you may have heard off just before E3. More information was shared by the Game Director Todd Howard during the E3 presentation. The game will be an online-only multiplayer shooter that is set way before the other Fallout games. The location is in West Virginia and Vault 76 opened for the first time in 25 years. You will be able to build wherever you want in the game world however you must be wary of the mutated monsters of local folklore as they can destroy what you build. There will also be a few nukes scattered which you can use to your advantage. Watch the trailer here:

This year, we will be seeing a new Elder Scrolls game called The Elder Scrolls Online Blades. This is a console-quality single player Elder Scrolls game which is free to play. It will be coming to iOS, Android, and VR. It will feature an endless dungeon, an arena for PvP as well as town building mode. Check out the trailer below:

The newest Bethesda IP which is completely original and the first to come out in 25 years is called Starfield. Nothing else is revealed aside from the teaser here:

To end the show, Todd Howard revealed that they are working on the Elder Scrolls 6. It is currently in pre-production so we can expect it to be out after a few years. Check out the teaser video below:

E3 has been more exciting than ever because of these announcements. Some of the games will be available in the distant future but as always, you can get the best prices with our trusted stores here at Cheapdigitaldownload.com.