Civilization 6 Gathering Storm introduces Dido in a brand new trailer. This is all about Dido and the Phoenicians, a civilization that specializes in Naval warfare.

Dido’s unique ability allows her to move her capital to another city, this is because of her unique ability called Founder of Carthage. This works great with this civ’s unique district called the cothon which provides more production of naval ships replacing the harbor. When a city has a cothon, players are able to move the capital there and start a project. This is actually an amazing option as to when the sea level gets high in the current site of your capital. The Government Plaza can also grant additional trade route capacity as well as give bonus production to create districts in the city all thanks to the Founders of Carthage.

The unique ability of Phoenicia is the Mediterranean Colonies. This ability grants the other coastal cities that are located on the same continent as you are to have 100% loyalty. Sight and movement boosts are also given to settlers when embarked. Settlers are also able to embark and disembark at no movement cost. Their unique unit is called the bireme which is a galleon replacement that has higher combat strength as well as movement. This is also capable of protecting the friendly embarked trade units found within four tiles of its location.

We can expect more civs and leaders to be announced as well as other features.

Civilization 6 Gathering Storm will be launching on February 14, 2019 for PC. 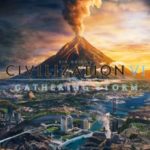 A new civ is available for Civilization 6 Gathering Storm and it is the Ottomans! Find out what they are all about here!