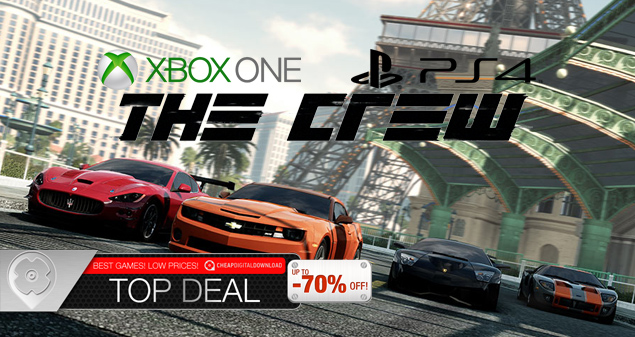 THE CREW XBOX ONE

Ubisoft has announced the final Open Beta for Xbox One and Playstation 4 players from 25 November until the 27th. “The Open Beta will allow players to explore the entire United States and complete challenges in two of the five regions available in the game, the Midwest and East Coast.”, according to a recent post on The Crew’s official website. PvP lobbies will also be available on the said regions during the Open Beta, as well as 2 out of the 5 spec classes (Street and Dirt).

The Open Beta will be accessible to all Xbox LIVE and Playstation Plus members, while some online features for Xbox One will require an Xbox LIVE Gold subscription.

Welcome to the next-gen of driving games – Developed exclusively for next-gen consoles, The Crew takes you and your friends on a “reckless drive inside a massive, open-world recreation of the United States”.

Enter the most varied driving experience of all times! – Build your reputation and rise from rank to rank in Detroit’s underground street racing scene, the 510s. Go on a journey across the roads of the United States and encounter other players along the way.

Never drive alone – Join other enthusiasts, team-up and complete challenges together, or go against them.

Live all the adventures of driving – Enjoy the freedom of driving along the roads of the entire United States.

Prepare your car for the next job – Customize your ride and get it all geared up for your next challenge.

Welcome to next-gen driving – Get new vehicles, customize it the way you want to, and show it off to other enthusiasts!

the best race game ever maid with awesome grapich

Great game but i want PS4 or XBOX ONE ;( Whatever its great4