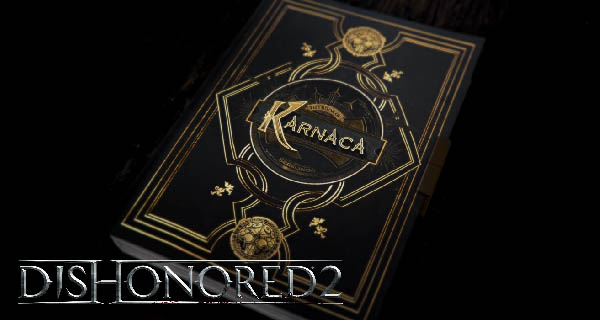 Arkane Studio has another trailer for us and it is a unique one. It is Dishonored 2 ‘Book of Karnaca’ Narrative Trailer.

The new trailer is about two minutes long. It also gives us a little information on what the Dishonored was about and what is to come in Dishonored 2.

The presentation of the video is very different from the previous trailers. Presented in a pop-up storybook style, it is quite unique and entertaining.

Delilah, a mad witch armed with powerful black magic, has seized the throne from Empress Emily Kaldwin, leaving the fate of the Isles hanging in the balance. As either Emily Kaldwin or Carro Attano, travel beyond the legendary streets of Dunwall to Karnaca – a once dazzling coastal city that holds the key to restoring Emily to power. Armed with the mark of the Outsider and powerful new supernatural abilities, hunt down your enemies and forever alter the fate of the Empire.

Quick Fact: The Outsider from Dishonored is back in Dishonored 2 but with a different voice actor. Robin Lord Taylor is the new Outsider, the previous actor was said to have ‘gotten the ax’ . Those who have played Dishonored said that they prefer the previous voice actor since his voice fits the part very well. The new one sounds like a teenager. – source: Polygon.com

Dishonored 2, is set to be released this coming November 11th and is available to be played on PC, PlayStation 4 and Xbox One. Pre-ordering the game will let you play a day earlier.