Steam has a new feature called Charts and it will have the best-selling as well as most-played games.

The Steam Charts has been launched by Valve and it is a new feature of their shop that will let you see the top-sellers and most played games in real-time. 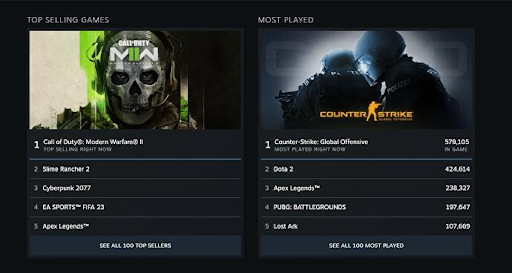 This new feature is the replacement of Steam Stats and has the player counts, weekly best-sellers, and monthly top-performing games with its detailed overview.

In addition to the live overview, users are also able to see what the most popular games are as well as what upcoming games are people excited about.

The new feature will have a top-sellers list which comes with the best-selling 100 games by revenue. The list can be filtered further by regional or global.

Also, the most-played games on Steam can also be seen and you can filter this further by current and daily players.

The Steam Charts can be accessed via the Steam Store tab, then click on the Stats found on the drop-down menu.

You are sure to get the best deals for video games here at Cheapdigitaldownload.com through our price comparison service and trusted stores.

Also, if you want the best deals in an instant, you can use the Allkeyshop browser extension.