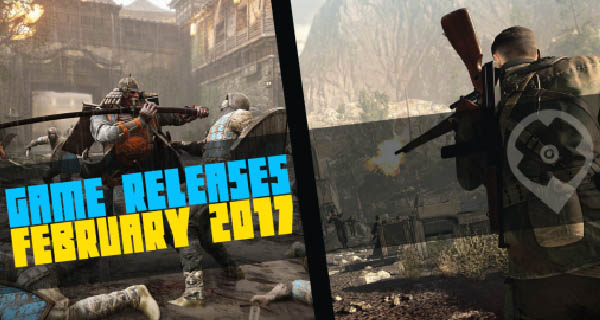 The month of February is now here, and January is only a memory. This month brings new games from big titles as well as cool new titles from the indie scene.

For Honor, Ubisoft’s hack-and-slash video game is a part of the roster. Also, a part of the list is Sniper Elite 4. The WWE franchise for this year is scheduled to be released this month as well.

You can check out these games as well as the new games coming out this February 2017!

A deep sea action-adventure, Diluvion is set centuries after the Great Flood. The water never receded and an unbreakable ice formed on top. The human race was forced to live underwater. You will take on the role of an aspiring submarine captain. You will get to command your very own submarine and venture into the deep sea. Get to discover new civilizations, towns, and meet new people even hire new crew members. There are 9 pilotable submarines that you can customize and upgrade depending on your playstyle.

WHAT’S HOT? WWE 2K17 is finally available for the PC. This version of the game is absolutely packed with exclusive offers. Available is the Goldberg Pack that includes the game’s Standard Edition, two playable arenas – the WCW Monday Nitro and Halloween Havoc, the playable WCW Goldberg in black tights as well as the playable WWE Goldberg in black and white tights.

Welcome to the world of Medieval warriors in Ubisoft’s latest hack and slash game For Honor. Choose from one of the three available factions which are Knights, Vikings, and Samurai. Fight in melee style battles in the campaign mode or the five multiplayer modes.

Play as Karl Fairburne in Sniper Elite 4. Set in Italy during World War II, you will play as a covert agent fighting alongside the Italian Resistance. Featuring an “expansive campaign”, a “dedicated co-op” and an “adversarial multiplayer modes.”

Offering a great adrenalin fix is MX Nitro. Ride fast, fly high and get all the combos. This is one great game for all you Motocross fans out there. Featuring 55 stunts, 40-hour solo campaign with head-to-head boss races, tons of customization options, challenges, achievements and so much more.

Ever seen a game that is an RTS and an MOBA rolled into one? Dropzone is that game and it will let you control a squad of highly specialized rigs. Matches are intense and are for 15 minutes only. Think hard about your strategies! Complete the match objectives and collect Cores in order to receive the highest scores. An intense fun game offering 1v1, 2v2, co-op and competitive modes.

Halo Wars 2 is coming to Xbox One and Windows 10 packed with amazing content. Featuring the Spirit of Fire campaign and a new villain called Atriox. Get to see the Ark which is “the biggest battlefield ever” and their five multiplayer modes that will surely keep you busy four hours on end.

Night in the Woods

Night in the Woods offers an adventure that you will surely love. Centering on exploration and the game’s character and story. Featuring many characters to meet and so many things to do in this amazing vibrant world.

Berserk and the Band of the Hawk

From the manga series and straight to your screens, Berserk and the Band of the Hawk offers hack-and-slash gameplay infused with the manga’s story. The gameplay is similar to that of the Dynasty Warriors series by Koei Tecmo.

A JRPG that is said to be “the must-play retro indie RPG built for the modern era.” You will play the role of an outcast that has in her a devastating power. You will journey through the world of the unknown to save your father. Offering a 16-bit visual with a modern design, four playable heroes, skills and 12 hours of awesome gameplay. The game’s character-driven story is immersive and captivating.

A single-player, role-playing game, Torment Tides of Numenera is the successor to Planescape Torment. Introducing you to the Numenera universe “a deep, thematically satisfying story.” Giving you amazing RPG elements with a character driven story and a reactive environment. A combination of combat with puzzles, social interaction, stealth and more can be seen in the game’s Crisis system which is definitely noteworthy.

That is the list of games coming out this month. Which of the games are you the most excited about? Tell us in the comments below.