First Vampyr Developer Diaries Is All About Making Monsters 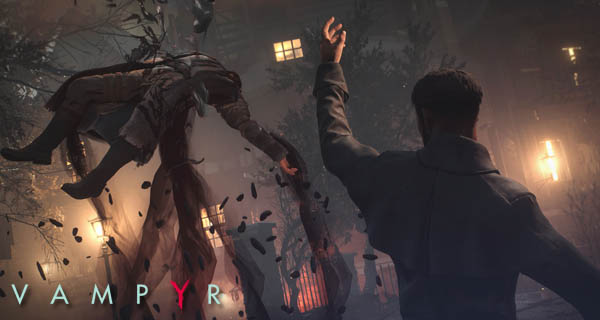 A four-part web series for the Vampyr Developer Diaries has been announced by DONTNOD with the first episode being launched as well. “Making Monsters” is the first episode and it is all about Dr. Jonathan Reid, the protagonist as well as the many vampire creatures that players will encounter in the game.

We will get to hear about Philippe Moreau’s thoughts on why he is fascinated with vampires:

“What interests me about vampires compared with other supernatural creatures, like werewolves or ghouls, is that the vampire is self-aware of their nature as a creature, as a predator,” Moreau further adds, “They are intelligent. This is intriguing for me because we can use this notion of dilemma, a moral choice, with the vampire figure”.

The dilemma that the newly turned vampire, Dr. Reid is facing is that he is not a monster, but a human with morals. So his haunting habits is a bit problematic for him.

Know more about the game’s overview below:

“Vampyr is set in 1918 London, with the city weakened by the recent World War I and ravaged by the Spanish Flu. The setting makes up an important part of Vampyr’s identity. DONTNOD will make players feel the duality that torments Dr. Jonathan Reid, giving them the freedom to choose who to sacrifice and who to save. Every killing has consequences, and it’s up to players to balance their need to feed and grow stronger, with the rapidly deteriorating city of London.”

The term vampire is actually what we humans call these creatures. What they call themselves are Ekons, and they vary depending on how they were turned. There are ancient Ekons which “plot from the shadows” and are still in human form. The Vulkods are scary looking and are bulky, they “prowl the streets at night”. The third type is the Skats who are ugly and deformed most probably because of the Spanish flu, they “hide in the darkest places of the city”.

Find out more about them in the video below:

No specific date is available for Vampyr as of yet but it is said to launch by Spring of this year for PC, PlayStation 4 and Xbox One.