gamescom 2021 starts today and runs until the 27th. As with all these kinds of events, it is also an all-digital event. And just like the previous ones, it is free to watch on Twitch and other platforms for streaming.

We have for you the gamescom 2021 schedule so that you wouldn’t miss a thing. 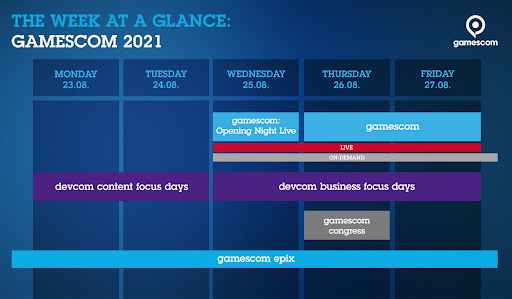 First up is the Destiny 2 showcase which will reveal The Witch Queen, the game’s next expansion. This will launch in early 2022.

Bungie will also talk about the crossplay quality of life feature plans of Destiny 2.

The Xbox Stream for gamescom 2021 comes with updates as well as game reveals. You can expect to see information about Halo Infinite arriving for the Xbox this holiday of 2021.

gamescom 2021 will be hosted by Geoff Keighley. The event starts with the Opening Live Pre-Show

There will be more than 30 games to be presented with video game announcements and premiers!

Dying Light 2 is set to launch on December 7, 2021 and Techland is will showcase the game’s features as well as gameplay details. We get to see the parkour mechanics as well as how the player will go around the city.

The show will be hosted from the beautiful Venice Beach, Los Angeles.

The Future Games Show will be hosted by the voice actors of Uncharted Nolan North and Emily Rose. The will feature world premiers, developer commentary and gameplay clips.

Expect more than 40 games as well as demos on Steam.

The Wrap-up Show is a recap of the notable moments of the week’s presentations.

We are excited to see games from Bethesda, Ubisoft, and Microsoft. The specific games that we are wanting to see are Far Cry 6, Starfield, and Elder Scrolls 6.

You know that you can get the best deals for these games here at Cheapditialdownload.com with our trusted stores and price comparison service.