Traveling and going on holidays may be limited at the moment because of the pandemic, however, if you are able, we have a list of cool gaming-themed hotels that you surely would want to visit. During the Sega-Nintendo console rivalry in the 90s, the two companies made their way to different industries. Nintendo had their consoles in some airplanes and they even worked with LodgeNet so that they could have access to some hotels. What Sega did was something similar, they tied up with Howard Johnsons which is an American Hotel and Motel chain. This was called Kids Go HoJo with Sega. Booking under that would provide portable game consoles in your room with multiple game titles, some collectible items, and free VHS Sega cassettes. This had been available from 1993 up until 1995 in the USA and Canada.

Video games did come a long way since the Sega-Nintendo rivalry, right now they are more realistic and so much competitive. Consoles and PC setups are more powerful, as well as customizable. Esports is also now a thing where playing teams are watched by an audience and cash prizes are involved. The hotels too have leveled up as they are also more committed to giving an unparalleled experience. Read on to check the hotels that have amazing gaming setups that are perfect for a gamer on a holiday or perhaps a place to quarantine to. 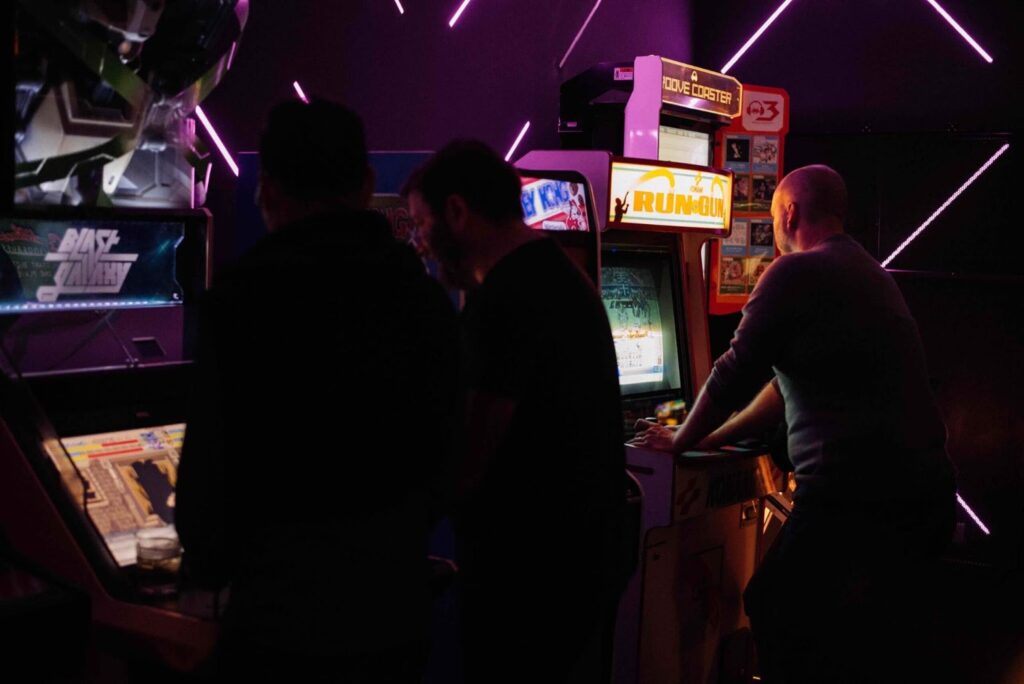 The Arcade Hotel is known as the first gaming hotel. There are different kinds of rooms available and each one comes with two gaming consoles – one retro and one modern. One retro game that we highly recommend you try out is the 1987 awardee Out Run. A state-of-the-art headset comes with the consoles as well as “a kick ass internet connection” as stated on their website.

Another amazing amenity of this hotel is that it has a Game Room that has 6 gaming PCs, a variety of game consoles, a Coin-op Arcade location, and a VR section. The Game Room can be rented for events, given that the attendees follow the health protocols. Being quarantined in the Game Room is also something that you could surely look forward to. 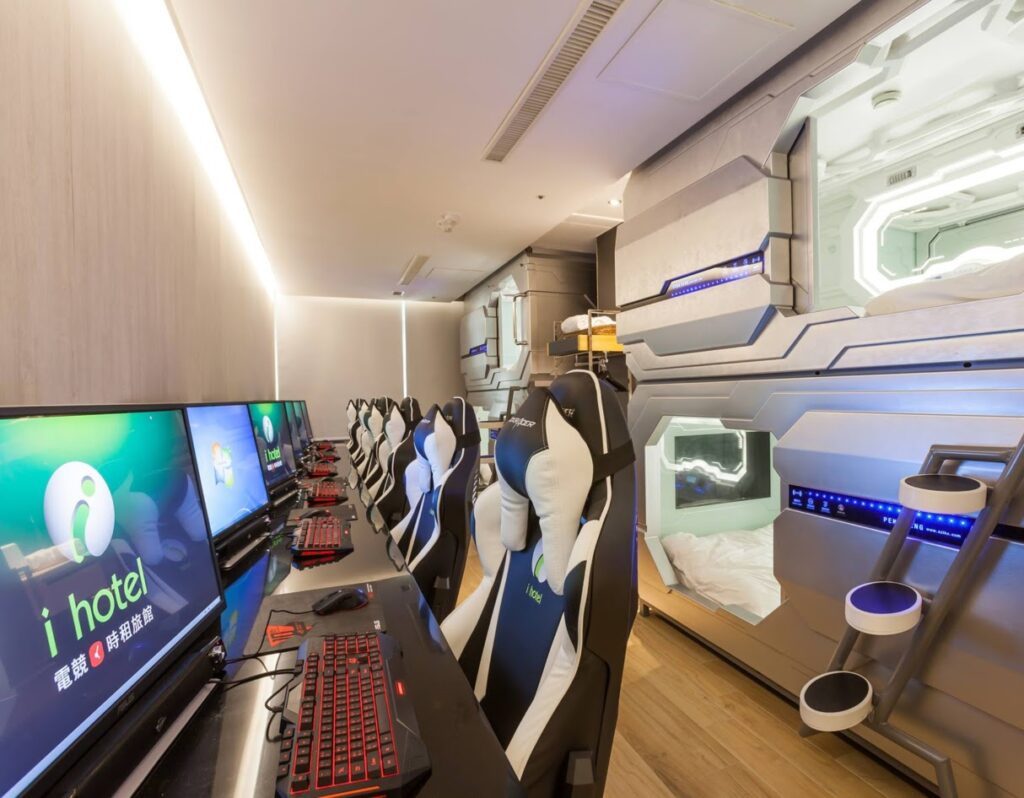 If you think the Sega summer promotion was already something, the iHotel is so much bigger than that. The lobby has 12 high-performance gaming PCs paired with high-end gaming chairs by DXRacer. During the Overwatch Contenders event, the Blank Esports team from Australia stayed in this hotel for two months, most of that time was spent in the lobby.

The standard rooms in this hotel come with sound isolating doors, 55” 4K Ultra HD TV, international wall plug outlets as well as two gaming rigs. Each rig comes a GeForce GTX 1080ti video card, 16 GB RAM, 10TB storage and a bootdrive. Each one also includes a 32-inch Asus monitor and a DXRacer gaming chair. Guests will also enjoy a dedicated wifi access point, Japanese-style toilet seats, and a bar fridge. Door-type rooms are also available in the hotel as well as a room with capsule-like beds with 6 gaming setups where you can play with your friends. 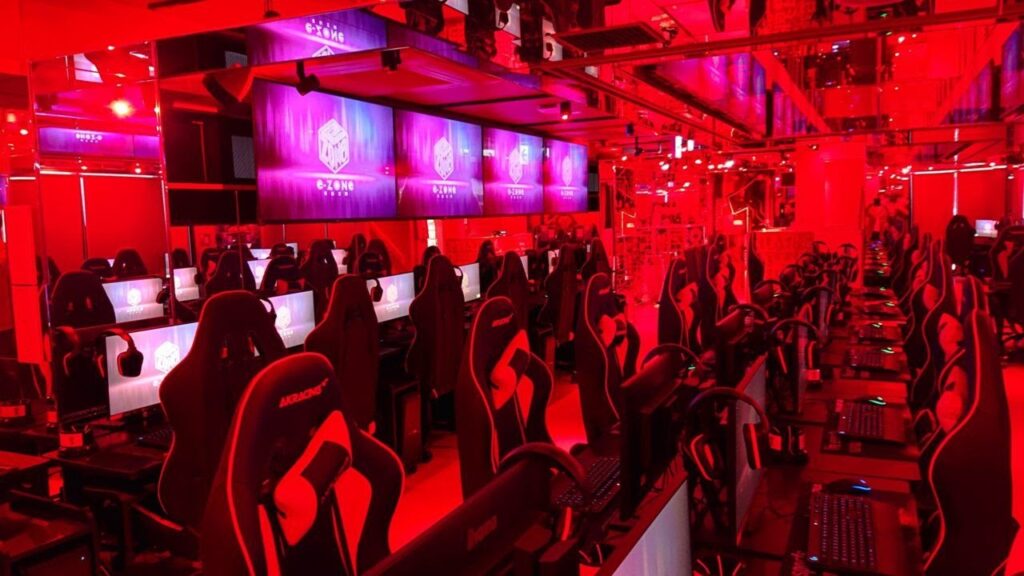 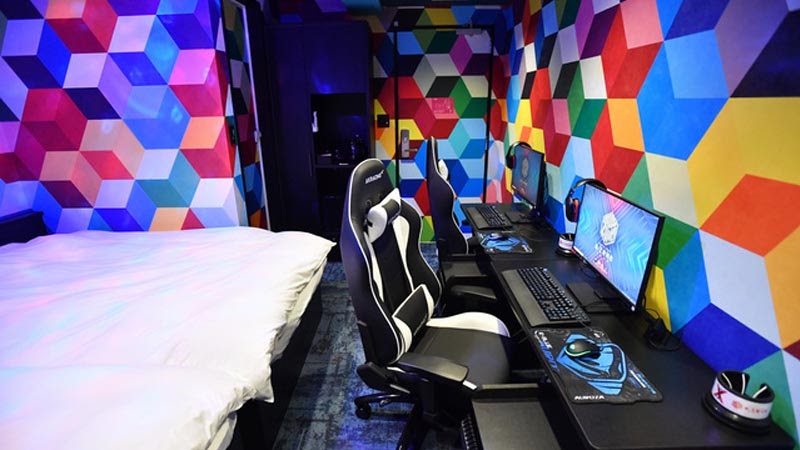 Last summer a new gaming hotel opened and was supposed to be for the opening of the XXXII Summer Olympics which had now been rescheduled for 2021. This is an esports hotel that sports 9 floors, 94 rooms, and 71 high-end gaming setups. Dedicated esports arenas are available on the hotel’s first three floors.

The first floor can be made into a hall for the major esports events and tournaments. For the hotel’s rooms, the fourth until sixth floors are for the male gamers. The eighth floor is for female gamers. These specific floors come with capsule-like dorm rooms. On the seventh floor are the private rooms that come in two types- the casual gamer or the professional esports athlete. This hotel is also open but still with strict health protocols in place. 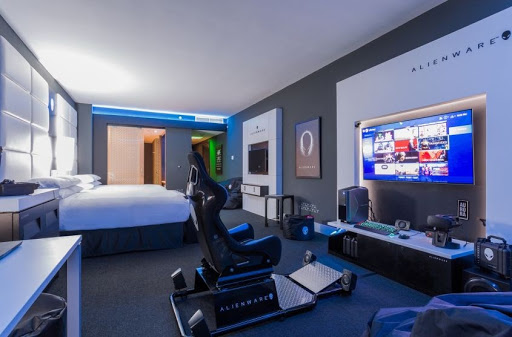 If you want a fancier version of a gaming room, then this is the best location for you. Hilton Panama’s Room 2425 comes with the Alienware wicked gaming setup.

The Alienware game room opened in 2018 and it comes equipped with the Alienware PC which has a Windows 10 Pro OS, Intel Core i7-8700 processor, Nvidia GeForce GTX 1080ti and 32GB DDR4 RAM. This is hooked to an Alienware 34-inch monitor. A 65-inch 4K OLED TV with a 5.1 surround sound system is also available along with an Oculus Rift headset and a pair of Xbox One Elite controllers. An Alienware 15″ laptop that has a Windows 10 Pro OS, Intel Core i7-7700HQ Quad-Core, Nvidia GeForce GTX 1070 GPU and a 32GB DDR4 RAM. To top it all off is a gaming chair that has been developed by NASA that is able to adapt to changing temperatures. Also, the room is rigged with an Alienware Effects system that is able to change the room lighting depending on the mood of the game that you are playing. Just think, how exciting it would be to play Resident Evil Village in this room or perhaps any of the Top 15 Horror Games! A partnership with Atari Hotels and the GSD Group will soon bring both a nostalgic as well as a futuristic experience to gamers of all ages. The very first one is planned to open in Las Vegas in 2022, the next one in Arizona. All in all they plan to open 8 of these hotels across the USA. Each one will sport a huge A-shape Atari logo with neon lights.

Napoleon Smith III, managing partner at GSD Group said that the rooms will come with different gaming consoles, a lot of games to choose from, high-speed internet connection, large-screen TVs plus 24/7 tech support. The idea of this hotel is that once you come in, you wouldn’t want to leave.

An honorable mention is Staybridge Suites in London who launched a Game Pad in 2013. The pad came with pizza, beer, snacks and a variety of other beverages.

It would be nice to stay at any of the hotels mentioned above, but if you think about it, you can also create a home setup similar to those, and you can have an everyday vacation at home.