Get Fox Company for Free from COH2 Ardennes Assault Pre-Order! 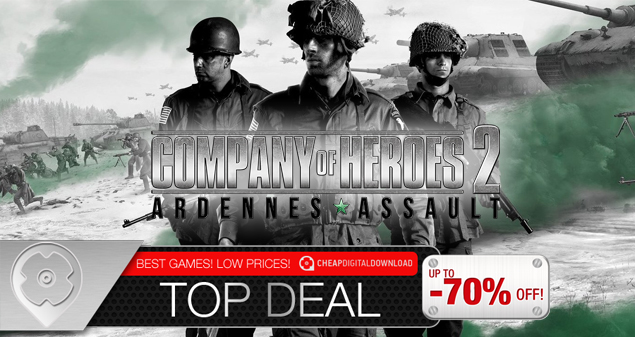 Relic Entertainment’s latest entry to its award-winning franchise, Company of Heroes 2: Ardennes Assault, is described as “the deepest single-player campaign that Company of Heroes has ever seen” so far. With three selectable companies to choose from, the game offers players different gameplay styles, specializations, abilities, and Officers, among others, all dependent on which company players are going to choose. The game also promises an outcome that greatly varies from one player to another, as the game also centers on a more personal journey which will also depend on the player’s choices all throughout the game with its Single-Player-Only game mode. 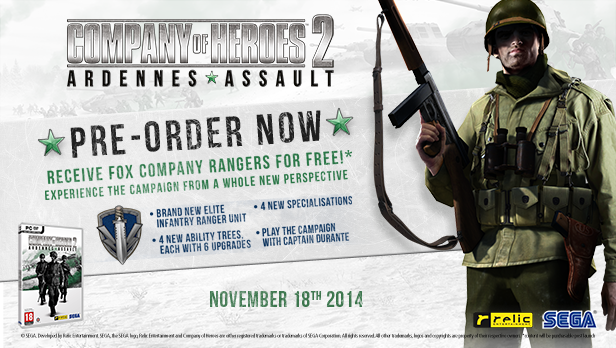 As the game’s release date is getting nearer (November 18th), players who pre-order the game will receive a fourth company for free, which includes Rangers from the Fox Company with four new ability trees (with six upgrades each), four new specializations, and being able to play the campaign with Captain Monte Durante. The Fox Company is a group of Rangers with an elite infantry background.

NON-LINEAR CAMPAIGN Take control of a strategic meta-map covering the key locations of the Battle of the Bulge. Choose the sequence to play the missions to ultimately defeat the mighty German Force and turn the tide of war.

18 ALL NEW SCENARIOS Engage in a dynamic campaign across the Ardennes landscape consisting of 11 missions and 7 engagements inspired by the events of the Battle of the Bulge. Campaign progresses with dynamic bonus objectives that change on different playthroughs, giving more replay options than ever before.

3 ICONIC COMPANIES The versatile Airborne unit The relentless Mechanized Infantry The heavy hitting Support unit Choose which one to deploy for each mission. Each of the three Companies is under the authority of a different Officer; each with their own distinct style, perspective and Abilities.

RESULTS THAT MATTER Take care with your strategic decisions, as results and overall Company health persists between missions. Veterancy earned can help increase an entire Company’s effectiveness, while lost units are a hit to the Company’s overall health. Fail to manage resources well and you risk losing a Company for good. The decisions you make will ultimately shape the outcome of your battle!

CUSTOMIZATION Customize each of your Companies’ 4 unique Abilities with up to 6 selectable upgrades. The unique skill tree offers 72 multiple levels of improvement allowing players to specialize their commanders throughout the course of the campaign.