Know What The Battlefield 1 They Shall Not Pass Weapons Are

Get a taste of the first #Battlefield 1 expansion pack. Available now in the CTE, servers deploying tomorrow. pic.twitter.com/yc8QVTwyWu

All thanks to YouTuber Westie for giving us the list of weapons as well as the requirements needed to unlock it. You will find the weapons listed below as well as Westie’s video at the bottom.

Requirements: Other melee weapons also include the Kukri, Sabre, and the Billhook. Westie believes that these are the new “puzzle piece weapons” that will be added to the battle packs. 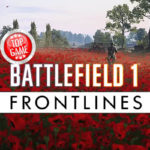 Check out the newest Battlefield 1 mode, Frontlines! Know everything in the video introduction. This new mode is said to be a cross between Conquest and Rush.