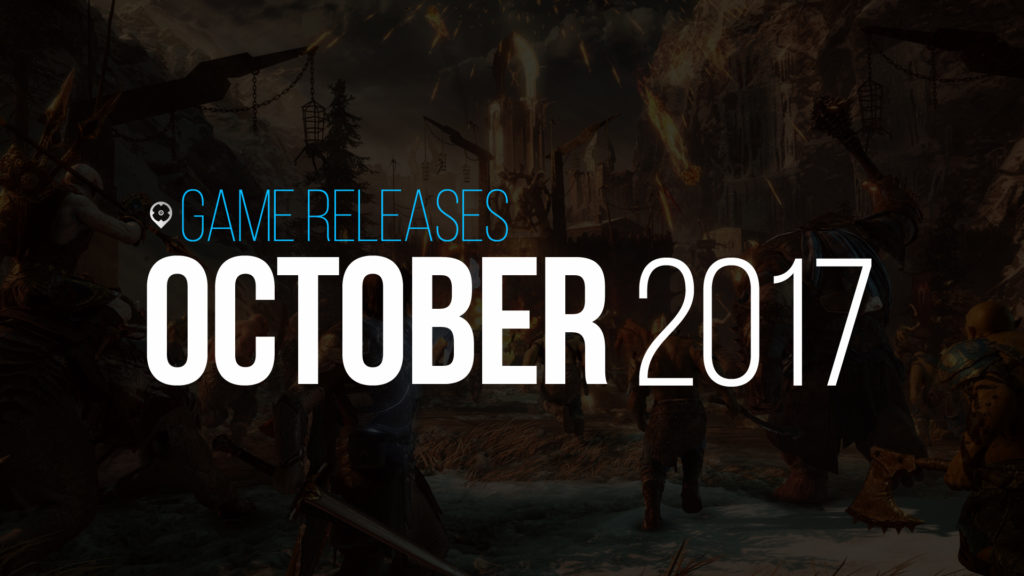 It’s almost the end of the year another month is here. We’ve got for you the October 2017 game releases.

It’s a mouth full off sequels, as seen in the list like The Evil Within 2 and Sprintires MudRunner. There are also major games coming in this month like Assassin’s Creed Origins and Middle Earth Shadow of War.

Get to know our list of October 2017 game releases below! Tell us which of the games in the list you are you are excited to play.

Battle Chasers Nightwar is a role playing video game that offers a rich story-driven dungeon exploration and turn based combat. The combat in the game is inspired by some of the greatest RPG’s to ever come out for consoles with their Battle Bursts and unique mana system. Also featuring randomly generated dungeons that are full of traps, puzzles, secrets and loot. You will also get to see friends and enemies that randomly appear as well as rare bonuses. Choose from the six playable heroes in the game from the epic Battle Chasers comic series. The heroes in the game comes with their own unique dungeon skills as well as perks, items and abilities.

Raiden 5 is coming to PC! This easy to learn, and hard to master game is re-releasing as Raiden 5 Director’s Cut. Get to play this action-packed arcade game with its cool new features. This includes voice-acting (a first for the series) exclusive Director’s Cut levels, three distinct ships armed with subweapons as well as different Defense and Mobility, three different game modes to play: Story Mode Boss Mission and Gallery. There are 2-player offline support and a new ship damage system as well.

Middle Earth Shadow of War is finally coming out this month. This much awaited sequel to Middle Earth Shadow of Mordor will still have you playing as the hero Talion who is still possessed by the spirit of Celebrimbor, the Elf Lord. The Nemesis System is also making a comeback from the first game. This time however it has been expanded to include Nemesis Fortresses. Players can also look forward to new Wraith abilities as well as skills that can be unlocked and modified with the use of bonuses.

Yet another sequel releasing this month is The Evil Within 2. Three years after the events of the first game, Sebastian Castellanos is back in Union City. Apparently, his daughter Lily, who he thought was dead is alive and is being kept at the STEM facility. He must face the horrors of STEM in order to save her before it is too late.

A new RPG is heading our way with ELEX. Set in the planet Magalan which had been ravaged by a meteor. The meteor brought a new element called ELEX which is very useful in varying ways. The meteor’s impact also separated the people into different factions. Each faction uses ELEX differently. One for removing emotions, another for resculpting life and the third is to power machines. You will play as the protagonist who came from the Albs faction, however, a jet glider crash made you different, making you factionless then your journey begins.

South Park The Fractured But Whole

Be the best superhero that you can be with South Park Fractured But Whole. Both crazy and hilarious, you will be brought back to the start of being a superhero. Design your very own costumes as well as create your own story. You will also be able to choose which superpowers your hero would have in order to bring peace and justice to the city. Get to fight alongside other superheroes with up to 12 members in your crew.

This is a remastered version of the comic book adaptation of Rogue Trooper Remastered is a third person shooter played in high definition. Giving players a mixture of stealth and action gameplay plus a cover-based combat. The game also features up to four players online co-op, 13 expansive missions, and enhanced character abilities.

Destiny is finally coming to PC this month. The game’s sequel Destiny 2, launches this month as well. Presenting an action shooter that offers an amazing gaming experience with 3-player co-op, an epic campaign, 4v4 competitive multiplayer and so much more.

Assassin’s Creed Origins finally gets released this month after so many delays. Set in the Ptolemaic period in Ancient Egypt. The story revolves around the conflict between the Brotherhood of Assassins and the Templar Order. Play as the protagonist Bayek and complete quests. Explore the huge open world available to you. Get to play in the new arena-based combat system where you will get to fight difficult enemies that culminate into a boss fight.

Wolfenstein 2 The New Colossus is set in the year 1961 and the Nazis were able to take over America. Players will get to play as BJ Blazkowicz, aka “Terror Billy” who is a member of the Resistance. World War II has ended and the Nazis emerged victoriously. Your role as a part of the resistance is to liberate America from the Nazi rule. You don’t have to do this alone, as you can recruit others to your cause. Get to use high tech futuristic weapons and kill every single Nazi you see.

Nights of Azure 2 Bride of the New Moon

Nights of Azure 2 Bride of the New Moon is the sequel to Nights of Azure by Koei Tecmo and Gust Studios. Set in a demon-ridden world offering an all-new cast. Offering a highly immersive story revolving around Alushe, a knight protector and the mysterious Queen of the Moon.

Boasting a more enhanced and expanded edition of Spintires, fans will surely enjoy the sequel Spintires MudRunner. Giving you a better experience with a new Sandbox Map having five of the first game’s environments, a total graphics overhaul, the new challenge mode with maps, 13 new vehicles and so much more improvements.