The New World 2023 road map has been revealed by Amazon Games.

The New World 2023 roadmap has been revealed by Amazon Game Studios and it has everything that you can expect in Spring 2023. 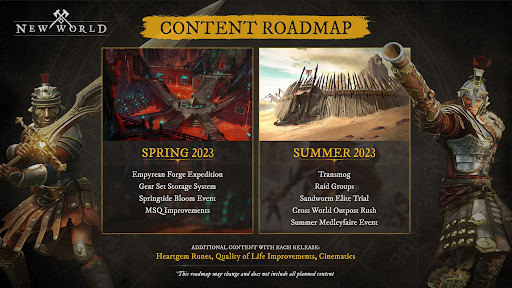 In New World’s latest developer update, it has been revealed that the Winter Convergence is making a comeback. This is the game’s Christmas event that will come with The Winter Warrior – a world boss.

Included in the Winter celebrations are festive skins, limited housing items and emotes.

Territory changes were also announced. This restricts switching through cooldowns and changes to crafting which will allow more recipes despite the crafting station tier.

By Spring of 2023, there will be a new Expedition, Springtide Bloom event and the addition of a gear set storage system.

By the Summer of 2023, we can expect raid groups, transmogs, an elite trial, the Simmer Medleyfaire event, plus the cross-world Outpost Rush.

Get the best available deal for New World on Cheapdigitaldownload.com through our price comparison service and trusted stores.

You can also get the best video game deal in an instant with the Allkeyshop browser extension. Make sure you download and install yours now.