NHL 22 is launching soon and EA Play members are able to play at an earlier time. New subscribers to EA Play will get a special deal for the game.


Good news for EA Play subscribers because they are able to play NHL 22 on October 7 during the Early Access Trial. The game is set to officially launch on October 15.

EA posted on Twitter, “Want to be first to experience breakthrough hockey in #NHL22? With EA Play, you can enjoy the early access trial starting on October 7!”

Players on the Playstation and the Xbox who were not able to subscribe yet can do so with a special deal of 99 cents only. The offer is available up until September 30, so grab yours now! 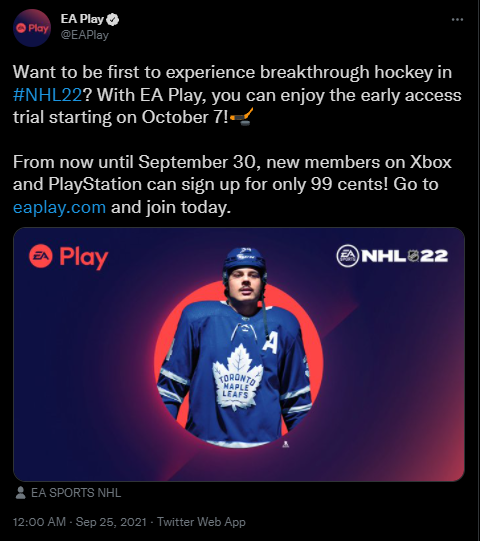 Thanks to the Frostbite engine, NHL 22 will be giving a “massive visual upgrade” for both the current-gen as well as the next-gen platforms. This is a first for the game, and we can expect the players to feel more alive with interactions that are true to life. The game also comes with new AR game stats that are projected in the environment plus the Superstar X-Factor system and many more.

NHL 22 is coming this October 15 for PlayStation 4, PlayStation 5, Xbox One and Xbox Series X|S.