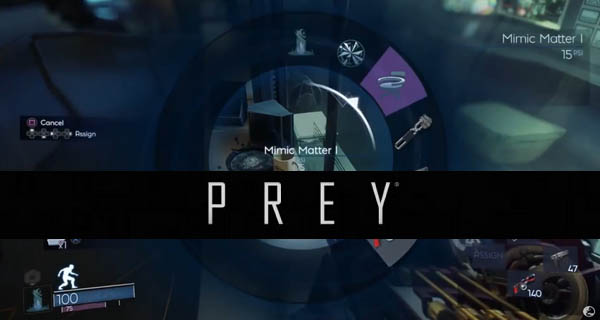 The Prey “Mimic Matter” ability is a very creative and astounding skill.

Bethesda introduces the Prey “Mimic Matter” ability in a video teaser. With this ability, players can become whatever inanimate object that is available in their surroundings. Examples of these are mugs, pizza boxes, or even a pair of headphones.

The newest video trailer gives the players an idea about the “mimic matter” mechanism. This is the protagonist’s ability to copy any inanimate objects. The video shows a wide range of objects that can be mimicked from an apple, a picture frame, a chair, a kettle, and so much more. The list is quite long for the objects that you are able to become.

This ability is a very great ability for survival or attack. Running away from the aliens that are after you would be a breeze. And on the other hand sneaking up on them for a surprise attack will also be possible. You would just have to copy an object and roll on your way. At first, only small inanimate objects can be copied, but if you further level up the ability, the larger objects can be mimicked as well.

So what do you think about the “mimic matter” ability? Share your thoughts with us in the comments. Prey will be available on May 5, 2017, and can be played on PC, PlayStation 4 and Xbox One.