The Return to Monkey Island will have a physical launch. 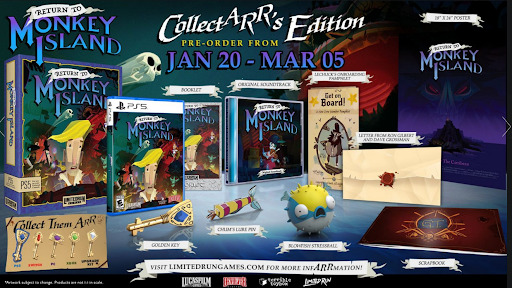 Another hilarious point-and-click adventure awaits as Guybrush Threepwood tries to stop LeChuck. Offering a lot of puzzles to solve as well as secrets of Monkey Island to discover.

There are a lot of faces that you would recognize and new challenges to complete. The game launched in September of 2022 to critical acclaim.

The past week, Limited Run Games announced that the game will have a physical release and that the pre-orders are only available until March 5, 2023.

The game also comes with a CollectAAR’s Edition which is available on PC, PS5, Xbox Series X|S, and Nintendo Switch.

RETURN TO MONKEY ISLAND AND CHEAPDIGITALDOWNLOAD

Get the best deal for your Return to Monkey Island CD key here on Cheapdigitaldownload.com through our price comparison service and trusted stores.

You can find all the best and cheapest online deals on Return to Monkey Island CD keys, game codes, gift cards, and antivirus software from the verified CD key sellers on our store pages.