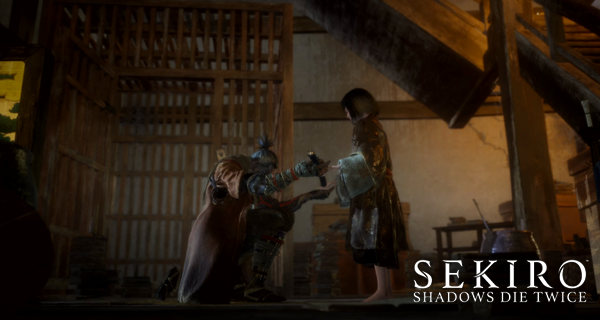 Sekiro evolves From Software’s formula into a stylish stealth-action adventure that, naturally, emphasizes precision and skill in its combat. It walks the line between deliberate and patient stealth and breakneck melee combat against threats both earthly and otherworldly. Its imaginative and flexible tools support a more focused experience that shaves down some of From Software’s overly cryptic sensibilities without losing its air of mystery. Sekiro is an amazing new twist on a familiar set of ideas that can stand on its own alongside its predecessors.

Sekiro plays differently than previous works. In addition to mastering a new style of fierce and unforgiving combat, you also have to start thinking like a ninja, using every tool in your arsenal to tip the scales against opponents with tricky movesets and multiple phases. Despite having no traditional level-ups, you have many ways to advance your character by finding items in the world, acquiring new skills, and discovering vendors.

Sekiro pushes these demands further than Dark Souls and Bloodborne ever did. Over the years, From Software fans have become accustomed to the language of Soulsborne games; we recognise scenarios and are wise to the tricks, we can identify viable strategies more quickly, and since the skills are transferable, we can execute these strategies with a measure of confidence. But Sekiro challenges this expertise. It invites you to try and then shows you how little you’re actually capable of. Sekiro is affirmation that From Software hasn’t lost its bite; that its games can make you feel vulnerable and strike fear in a way few others can. It’s a heart-pounding, palm-sweating, and nerve-wracking gameplay experience that instills tension the likes of which I haven’t felt since first playing Demon’s Souls.

Sekiro: Shadows Die Twice manages to live up to its monstrously high expectations in nearly every way. Its high-risk combat system is as satisfying as it is punishing, and its level design begs you to explore every inch of the world. While its locations and enemies aren’t as varied as in previous From Software games, you’ll hardly notice when you’re locking swords with opponents across several beautiful settings. Sekiro tells an intriguing tale about loyalty and mortality packed with surprises and easy-to-miss side stories.

And there you have it! The game is different from Dark Souls and Bloodborne but is still amazing in its own right. The game was also able to get near perfect scores from the critics, which says a lot about the game.

Remember you can get the best rates for Sekiro Shadows Die Twice here at Cheapdigitaldownload.com