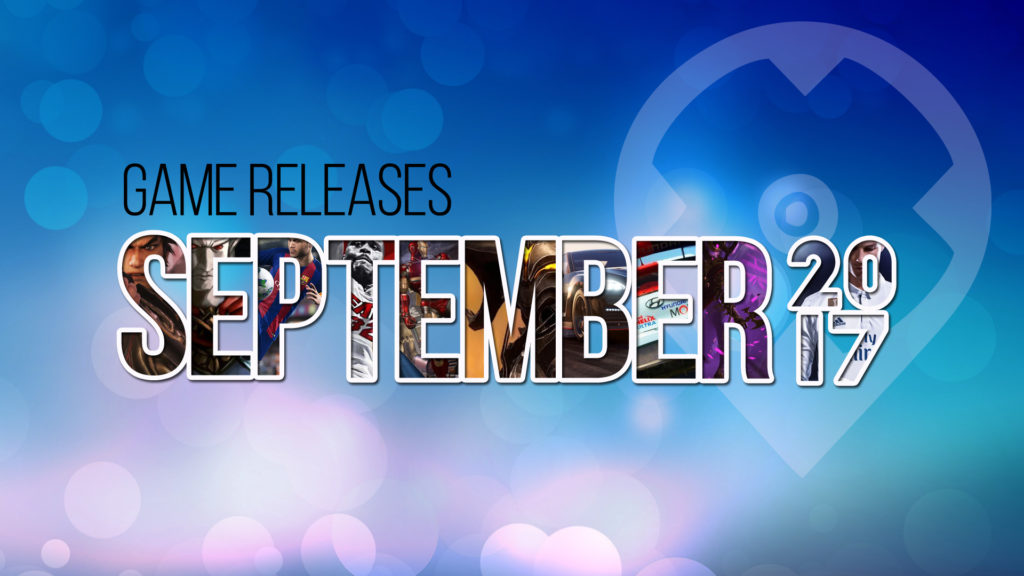 It’s another month and we’ve got new games for you with our September 2017 Game Releases. This month has a lot of big games in store for you, with the biggest ones coming from sports and racing titles. You can see all these in the list below:

If you do decide to get any of the games below, check out our price comparisons for the best prices available.

Koei Tecmo’s hack and slash video game is based on the Warriors video game. Choose your character in Warriors All Stars and defeat your enemies to reach your goal. Four support characters will be available as well.

Just like with previous Warriors games, not every character is equipped with weapons, some actually have warrior cards instead. Each character has corresponding hero cards. These hero cards will give heroes increased abilities.

The game also features 30 playable characters 27 of the characters are from the 13 Koei Tecmo’s video games series. The other three are actually original characters that was based on the Imperial Regalia of Japan.

Age of Fear 3: The Legend

This turn-based role-playing strategy game which promises A “deep and challenging gameplay.” Age of Fear 3: The Legend will let its players take control of a huge variety of units that individually have their own set of skills. You are able to face and battle advanced AI in the game.

The game will have two story driven campaigns. One of which you will be able to play as a dryad sorceress, the other is a drunken dwarven lord. The game’s turn-based battles are found in fully interactive environments. There will also be neutral factions that you can use to your advantage.

Age of Fear 3: The Legend is easy to learn however hard to master.

Fans of the game will definitely love PES 2018’s all new features! There are lots of things like all-new menus, realistic player images PES League integration, an online coop mode, the return of the fan favorite Random Selection Match Complete with new presentation and features, enhanced visual reality, and many more!

This year, NBA 2K18 is packed with new features. The game’s MyCareer is making a comeback and it has gone through a complete overhaul with new creation tools. Also, returning are the MyGM and MyLeague game modes. Players are also able to try the MyTeam mode which will let you build your own basketball team.

Neighborhoods is also an all new feature added to the game. This offers an open world feature where players are able to interact with other players online.

Marvel Vs Capcom Infinite offers the merging of two huge universes. You can either play as your favorite Marvel or Capcom character in 2 versus 2 battles. There are 14 confirmed characters upon the game’s release: Captain Marvel, Iron Man, Captain America, Mega Man X and Morrigan, more characters are expected in the future.

Get to enjoy the game’s cinematic story that allows both heroes and villains to come together and save the world from Ultron Sigma.

Ranked Matches, Global Leaderboards, online lobbies and so much more can be expected in the battles.

Get to experience the “Ultimate Driver Journey” with the all new awesome features of Project Cars 2, Choose from over 180 licensed cars to race. The game also features precision handling and full VR and 12K HDR Support. There are also a wide variety of motorsports to choose from like Rallycross and Indycar. A realistic racing experience is heading your way with dynamic environmental conditions as well as various track surfaces. An online mode is also added called Online Championships, here players can race with other players online.

The new installment of World Rally Championship’s WRC 7. It includes 13 rallies as well as 52 special stages that include fully reproduced environments. Expect more agile, powerful and faster cars this time around there are 52 official teams as well as a large selection of drivers from WRC 2 and WRC Junior. New features in the game include new physics, overhauled tracks, local split-screen multiplayer, and weekly online challenges.

Get to play a new narrative campaign in Total War Warhammer 2, play across the vast continents of Lustria, Ulthuan, Naggaroth, and the Southlands.

Play as one of the eight Legendary Lords from one of the four iconic Warhammer Fantasy Battle races. As a Legendary Lord, you must perform arcane rituals so that the progress of the other races will be foiled and the Great Vortex to be either stabilized or disrupted.

FIFA 18 is powered by Frostbite and it brings to life iconic players, stadiums, teams, and atmospheres of FIFA. The game has included Dramatic Movements where in which players are able to enjoy new movement, finishing animations and more fluid heading and striking. FIFA 18 also sports the Real Player Motion Technology that captures the movements of real-life football icons and brings it to the game. This will make each player feel and move like their counterpart in real-life.

The game’s story mode is also something to look forward to. This is called The Journey which stars Alex Hunter from FIFA 17.