Steam Removes Games That Use Blockchain, NFTs and Cryptocurrency

Steam won’t have games that are using cryptocurrency, blockchain and NFTs as announced by Valve.

Several games had been delisted on Steam because those games are using blockchain, cryptocurrency and NFT technology.

As of the moment, it is not clear why Valve made that move, but we think that it is to avoid problems in the future.

One of the games removed is Age of Rust. According to developer SpacePirate_io, Valve is not allowing any game that would have items with real-world values to be sold on Steam. 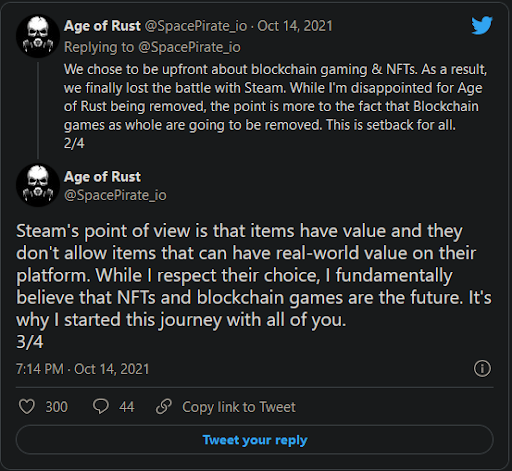 The move could also be a potential missed opportunity especially for their games like Team Fortress 3 and CS: GO. Valve would surely benefit from selling items through NFTs and cryptocurrencies.

However, it is still understandable to remove the said type of games because of the recent scams happening in the gaming world regarding NFTs. There had been developers promising an NFT kind of marketplace only to run away with the money from the investors and gamers.

An example is the game Evil Ape where the developer promised a 10,000 NFT worth of marketplace only to disappear with more than $2.5 million when it launched.

Another thing is that there are a lot of people who don’t understand cryptocurrencies like Bitcoin, Binance Coin, XRP, NFT and Ethereum. Since that is the case, Valve would want to stir clear from possible problems caused by those type of games.

NFTs stand for Non-Fungible tokens which are digital collectible items that are unique and non-replaceable.

An example is the original Nyan Cat GIF that sold for $580,000. The person who made the purchase is the sole owner of that GIF.

NFTs include other things aside from GIFs like memes, images, music, text, game code, and music.

CEO and co-founder of Twitter, Jack Dorsey sole his first-ever tweet as an NFT. The post read, “just setting up my twttr” and it sold for more than $2.9 million.

As of the moment, NFTs are being noticed by art galleries and game companies.

CEO of Epic Games Tim Sweeney announced that they are open to games who “use blockchain tech” via their official twitter account. 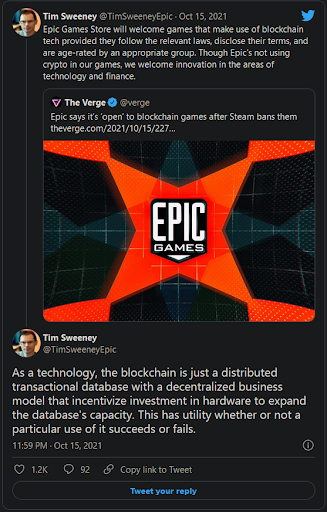 What Sweeny said in his recent tweet is actually different from his announcement back in September. He said that blockchain games are not welcome on Epic Games because the platform is “tangled up with an intractable mix of scams.” 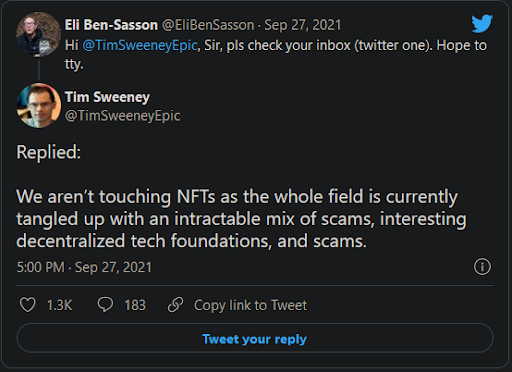 Not sure if the reversal of Epic Games’ decision has been swayed by that of Steam so that they could take advantage of the situation.

Would it then be possible to see NFTs in Fortnite? It could be possible but maybe not soon as there are so many things to consider. Those who are considering adding NFTs in games would have to go through applicable age restrictions and finance laws.