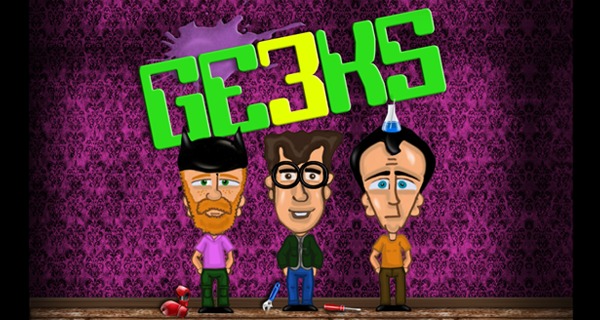 A new point-and-click adventure is here and it is called 3 Geeks! This is brought to us by developer Romuald Serrado and publisher Adipson Studios, this humorous adventure video game takes its inspiration from The Big Bang Theory, Monkey’s Island, Day of Tentacles, Les Chevaliers de Baphomet, and Manic Manson. The game is available to be played on Windows PC and has two available versions which are French and English.

Get to play as the 30-year-old inventor named Rodolphe Wallace who is forced into an absolutely crazy adventure with two of his friends. Wallace had been admitted to an insane asylum for a year now, he had been denied his discharge papers which made him come up with a plan for escape. He takes with him his two friends, one who has a disorder for wanting everything to be clean, Cyperien Karanoff and the other a bipolar that has a very short attention span, Luc Vega. Together, they escape the asylum and find themselves on board a space shuttle called SPIKNOUT.

The shuttle launched them to outer space which is a good thing as a crazy guru named Nathaniel set off several nuclear bombs to avenge his goat who choked on garbage. Nathaniel believes that the people’s pollution is the cause of the death of his goat.

The shuttle SPIKNOUT had been in orbit for five years and was programmed to land after. At this time the planet’s radiation had been reduced to a minimum allowing life to thrive.

Our 3 madmen find themselves in a town called Ragoon City which is located near a desert, and this is where the whole crazy adventure begins.

The year was 1984, around 35 years ago. Romuald Serrado conceived the idea of 3 Geeks for a Commodore 64. As the ’90s came the Atari ST had been born and with everything happening the game had been boxed up as a memory and was brought back out once again by the winter of 2012. This is the time when Serrado discovered a point-and-click creation software called AGS (Adventure Game Studio by Chris Jones).

Serrado took everything that he remembered to complete the 3 Geeks project and it was finished by January of 2019.

What Will You Need To Run 3 Geeks?

How Long Is The Approximated Playing Time?

3 Geeks is now available on Steam!