‘The Chef’ Is The New Hitman Elusive Target No. 14 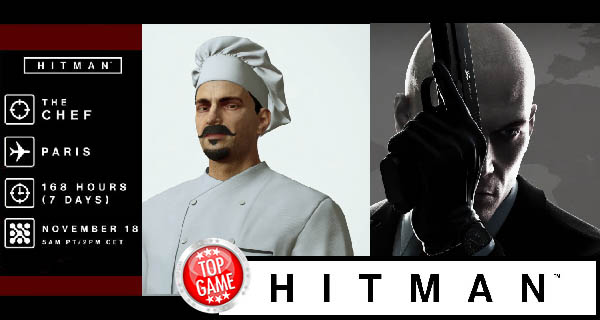 The target’s name is Gabriel Santos. He is a popular celebrity chef with a violent temper and a cruel hand. He feels untouchable because he believes that he is protected by “immunity granted by wealth and public life”. There is a lot of pending cases against him for assaulting some of his assistants as well as producers. The client who requested for your service is a former investor of Santos. This elusive target is only available until November 25. Like all the previous Elusive Targets, if you fail or die, you cannot do this over again.

Get to know more about the Elusive Target no.14 below:

You will now be able to unlock new suits rewards for Agent 47. This will all start with Elusive Target no. 14 ‘The Chef’. We’ve provided an image below that will serve as a guide to what suit you will get in a specific location or mission. You will be able to use the suits that you’ve earned in any contract or location as long as there is an option to select a starting suit available. 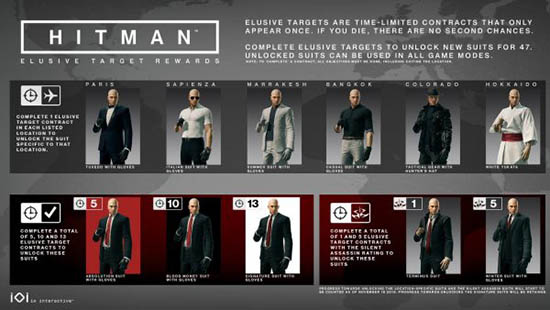 “It’s important to note that these adjustments won’t affect anything you’ve already unlocked or your progress to unlocking the three accumulative suits (HMA, Blood Money, and Signature Suit) that have been the three rewards available so far.”

If you have just decided to pursue the Elusive targets starting with no. 14, that is okay. You will still have the chance to get all the available rewards above. Just as long as you don’t fail or miss further Elusive Targets. 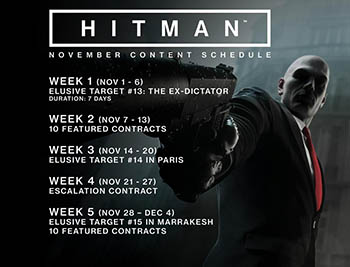 The end of Hitman Season One is near with the Hokkaido Japan episode. And Season Two is soon coming. With the schedule provided by Hitman, a new escalation contract is available for November 21-27 and the Elusive Target no. 15 will be on November 28 – December 4. Don’t miss it!

Any specific suit reward you are most aiming for? Share it with us in the comments below.

Hitman Second Elusive Target This Month Is The Identity Thief

Elusive Target for the month of October is The Identity Thief.