Top 10 Most popular eSports Games of the decade 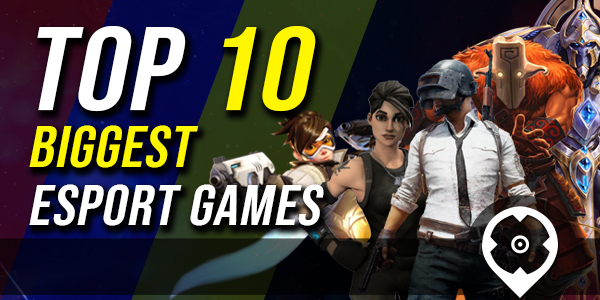 Apex Legends is based on Respawn’s Titanfall series, so action-wise it falls right in the middle of the genre, with big, splashy battles and all-consuming firefights. It’s not quite the one-shot, one-kill, constant hiding of PUBG, but it’s also doesn’t have the bullet-sponge feel of Fortnite.

And that’s thrilling! There’s a “meta” to “Apex Legends” that is deeper and smarter than games like “Fortnite.” It feels like there are many ways to win, with a variety of different team setups, rather than a “best” way to win. And that leads to the kind of experimentation that keeps the game fresh.

In truth, Rocket League is more complex than I’ve described, but not by all that much. An intricate physics engine dictates how your car and the ball move during a match. Where you hit the ball, and the speed at which you hit it, determine where the ball flies and rebounds around the enclosed stadium. Rather than soccer, think of Rocket League as a glorified billiard game, with your car as the cue.

Is is one of the best games Ubisoft has made in years, and a spectacular return to form for Rainbow Six. This is a shooter with consequences – one where a bad angle or a predictable position kills you long before the bullet lands, and where death is everything rather than an inconvenience.

Rainbow Six Siege is an accessible and deeply satisfying shooter that rewards planning and teamwork over a quick trigger finger.

At first glance, Black Ops 4 looks like a sad anachronism, desperate for relevance. The single-player campaign has been jettisoned, leaving us with just the multiplayer experience. Or, more accurately, three experiences: the traditional CoD array of deathmatches and domination matches; Zombie mode, in which four players attempt to survive as long as possible against ultimately insurmountable undead hordes; and the new Blackout mode, a variation on the battle royale genre explored so successfully by Fortnite and PUBG.

Each aspect of Black Ops 4 introduces some great new ideas that continue to evolve the series. Instead of bringing some crazy twist to battle royale, Treyarch smartly uses the format to combine past Black Ops offerings into a fun, hectic mode that entices us to jump in over and over again.

A satisfying strategy game that’s not for the faint of heart or the easily confused.

League of Legends is immensely successful because it’s fun at all skill levels. The basic premise of the game is easy to grasp, but mastering it takes years of dedication. Competitive players can test their skills in ranked matches and climb their way up the ladder. Currently, the ladder divisions are as follows: Bronze, Silver, Gold, Platinum, Diamond, Master, and Challenger.

Let’s address the elephant in the room. Overwatch is a lot like Team Fortress 2, Valve’s seminal team-based shooter first released in 2007. Both games are light-hearted, multiplayer-only affairs, pitting teams of colourful characters against each other to capture points, escort packages, and defend bases..

Like all team-based games, Overwatch is better in every way when you add your own friends to the mix, and jumping into random games solo is a recipe for screaming at your TV and complaining about the awful choices your teammates are making, like bringing two snipers or neglecting to have a healer.

PlayerUnknown’s Battlegrounds has taken the military-sim gameplay popularized by games like ARMA and DayZ, boiled it down to its most exciting parts, and streamlined it into quick and accessible rounds of pure, hassle-free, survival-based action. Even though each game starts the same way, its remarkable ability to feel like a new, tense adventure each and every round has kept me coming back for hours on end.

PUBG’s technical shortcomings can undermine its broader achievements on rare occasions, but they don’t override your desire to continue playing. Each phase of a match presents a different type of tension that is equal parts thrilling and terrifying, driven by the insatiable desire to be the last person (or squad) standing.

The free-to-play Counter-Strike: Global Offensive is arguably one of the most iconic FPS titles of its generation. The new Panorama UI drastically improves its interface, but the gameplay can sometimes feel repetitive.

CS: GO is a very well-made competitive game that has a growing, thriving community of amazing players. It will definitely take some time for a new player to climb to the top, but it’s a very rewarding journey! Players with enough skill level can even opt to play professionally and get money for playing against other players. Overall, CS: GO has a great community, great developers and offers an overall fun experience for anyone with enough time on their hands to partake in.

Dota 2 is the successor to the original Dota and features polished graphics, smooth gameplay, and an excellent amount of variety (heroes, game modes, and skins). Despite the steeper learning curve than other MOBAs, Dota 2 appeals to a broad audience and is one of the most popular and widely played MOBAs in the world. The game was developed by IceFrog, the the same designer behind the original Dota. Gameplay-wise, Dota 2 plays exactly like the first game, except with a lot more polish given the new engine and stand-alone client.

A rich competitive sandbox that handsomely rewards your time and energy, Dota 2 isn’t just a game—it’s a hobby and a passion.

Fortnite’s stylish looks and risk-taking ideas are what’s made it into the powerhouse you know today. Mention Fortnite to kids anywhere and they’ll probably know what you’re on about. In emulating pop culture with its meme-like dances and Pixar-good-looks, Fortnite has became pop culture itself.

Apex Legends is a more fine-tuned battle royale experience, and PUBG is more serious in its delivery, but nothing offers the lighthearted, fun for all ages battle royale that Fortnite does.