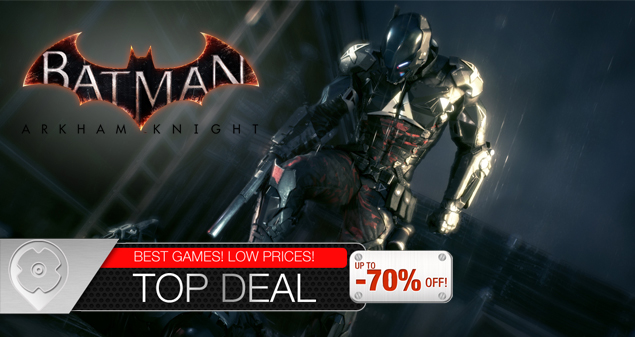 Batman: Arkham Knight is the “epic conclusion to the Arkham Trilogy”. Arkham Knight features Batman (in case you didn’t know him), a superhero trained to the peak of human physical and mental perfection, and an expert in martial arts.

In the explosive finale to the Arkham series, Batman faces the ultimate group of villains. The Scarecrow returns to unite an impressive roster of super villains, including Penguin, Two-Face, and Harley Quinn, to destroy The Dark Knight forever. Batman: Arkham Knight introduces Rocksteady’s uniquely designed version of the Batmobile, which is drivable for the first time in the franchise. The addition of this legendary vehicle, combined with the acclaimed gameplay of the Batman Arkham series, offers gamers the ultimate and complete Batman experience as they tear through the streets and soar across the skyline of Gotham City.

Many gadgets and gameplay elements from previous Arkham games return, including the grapnel gun, line launcher, batarangs, the countering system, and detective vision. But still the best perk of this game is being the Batman himself. This game is definitely a treat for all you Batman fans out there!

The only problem, for me, with the latest instalation of this game were controls. But I hope this is all fixed in this release and I hope I can fully enjoy it

I have played old series of batman and game is rly awesome, don’t have this yet but this is rly good game to.

In the explosive finale to the Arkham series, Batman faces the ultimate group of villains and thats so cool also The Scarecrow returns to unite an impressive roster of super villains, including Penguin, Two-Face, and Harley Quinn thanks for top deals ♥♥