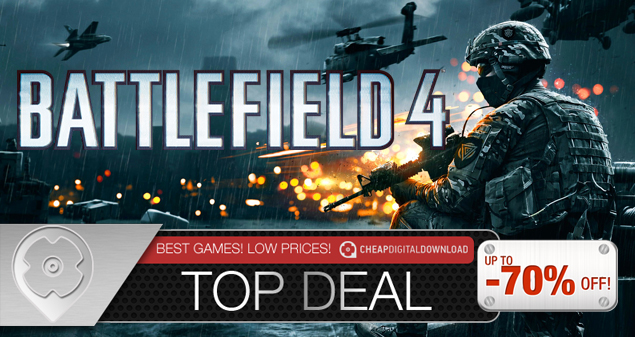 Battlefield 4™ on PC, powered by the advanced technology of DICE’s proprietary Frostbite™ 3 engine, blurs the line between game and glory. With dynamic destructable environments, vehicular combat, and the chaos of all-out-war with 64 players, Battlefield 4 on PC is an unmatched interactive experience.

In addition to its hallmark multiplayer, Battlefield 4 features an intense, dramatic character-driven campaign that starts with the evacuation of American VIPs from Shanghai and follows your squad’s struggle to find its way home.

There is no comparison. Immerse yourself in the glorious chaos of all-out war, found only in Battlefield.

* Only in Battlefield can you experience Levolution on the PC, changing the landscape in real-time with interactive environments that react to your every move to ensure no two matches are alike.

* Only in Battlefield will you find the awe-inspiring power of the next generation Frostbite™ 3 engine, delivering unmatched visual and audio fidelity, superior character animations and dynamic destruction.

* Only in Battlefield can you experience an unmatched level of all-out war that grants you the freedom to play to your strengths and your own path to victory.

* Only in Battlefield do you have the power to dominate land, air and sea with all-new, intense water-based vehicle combat on the PC.

* Only in Battlefield will you lead your squad in Commander Mode, which lets you take point and turn the tide of battle from both the edge of your seat or on the go with your tablet.