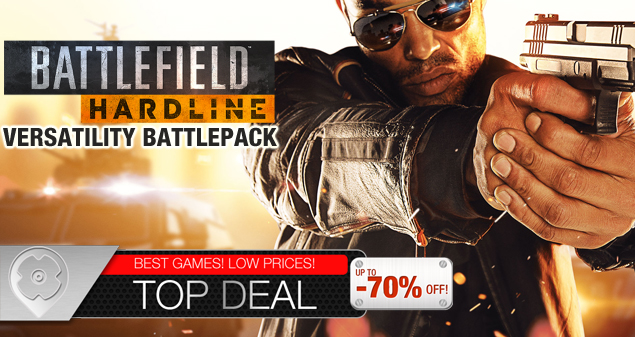 Feel the exhilarating experience of the feud between cops and criminals in Battlefield™ Hardline. This action-packed blockbuster combines intense multiplayer combined with moments of Battlefield signature action and an emotionally charged story, setting a similar feel to a modern television crime and drama.

Buy Battlefield Hardline and receive 3 Gold Battlepacks that contain combinations of weapon accessories, patches and emblems, XP boosts, and character customization items. These Battlepacks are delivered once a week starting from your initial game activation.

Versatility Battlepack features a highly versatile assault rifle, a unique camo skin for your weapons, and a 2x XP boost. This is a reward built specifically for those who’ve pre-ordered the Standard Edition or those who went with the Digital Deluxe Edition.

Battlefield Multiplayer – Featuring the strategic team play, variety, and immersion of Battlefield, set in a gritty and glamorous world of cops and criminals.

Visceral Singleplayer – From the award-winning studio that brought you Dead Space, Battlefield Hardline delivers an innovative and dramatic story presented in the style of a modern television crime drama.

Downtown Destruction -Shoot out the inside of a subterranean grow-lab, blow open a gleaming bank vault, or blast apart a Los Angeles car dealership. The wide array of urban environments is modern, sexy, and highly destructible.

Gadgets and Guns -Play with a full arsenal of military-grade weapons and fictionally inspired gadgets, such as sawed-off shotguns, stun guns, zip lines and grappling hooks. Gadgets can be used anywhere, on every map, making for chaotic and unpredictable combat.

Vehicular Mayhem – Fly across the map to reinforce your crew, turn enemies into fresh road kill, or blow past cops on a loot-laden motorcycle. Vehicle gameplay in Battlefield Hardline is fast, fresh and intense.