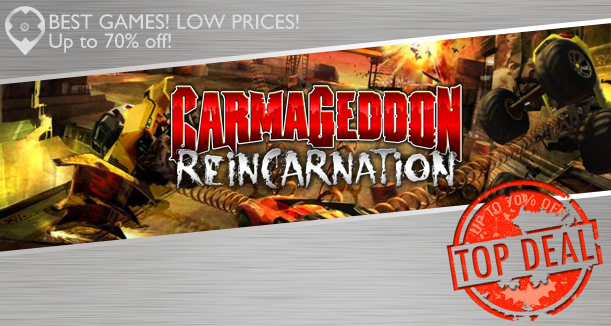 Carmageddon: Reincarnation is one of those classic “shoot your enemies while getting to the finish line” types of games. It’s like total chaos where drivers are complete lunatics paired with automotive killing machines. Run over pedestrians and destroy your opponents in this mix of hardcore violence and racing in one. This is a racing game where you are not just racing, you are also fighting for your own life. Go crazy and be the best racer there is!

So Many Pedestrians, So Little Time 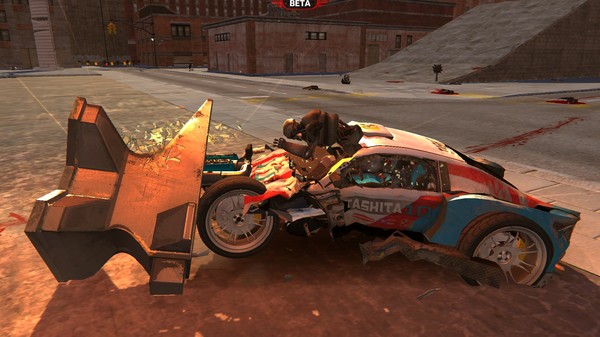 The Car Is The Star! Carmageddon: Reincarnation features a wide and varied range of cool, crazy, custom killing machines; each with its own highly distinctive “character”. Carmageddon cars are specifically built for the job in hand – wrecking opponents and killing peds! Carmageddon basically invented the whole concept of videogame physics and real-time damaging of cars and the scenery, and so it’s obviously our responsibility to bring this technology BANG up-to-date with a brand new state of the art car damage (and repair) system. Crush, bend, twist, and completely mangle your opponents’ and your own car – smash parts off, or split it in two; the original game was all about wrecking motors and pummelling pedestrians, and we’ll be taking this to a whole new level! Of course Power, Armour, and Offensive upgrades make a return, along with new customising options, allowing you to personalise the killing capabilities of your preferred rides.

A host of old favourites make a comeback, along with some all-new faces. Only ever seen before as low resolution mugshots, now you get to see them from head to toe (well, head to knees in the case of Screwie) in full HD 3D glory – usually as they smash through their windscreen and hurtle past (or INTO) yours!

The new environments are amalgamations of the best bits from the numerous chunks of landscape that we all loved to tear around in Carmageddon. “Bleak City”, “Dusty Trails”, “MagNuChem” and “Snowy” levels all return in updated forms, with their memorable landmark features such as the Loop ’de’ Loop, acid pits and Football Stadium. Everything is reassuringly surreal; hell, we’ve even managed to incorporate a giant food mixer into a level!

The topography and detail in the locations is updated and enhanced, with even more fun stuff to smash into, smash up, snap off, and send careening into the poor pedestrian population. “Nice Shot Sir!” And talking of pedestrians… 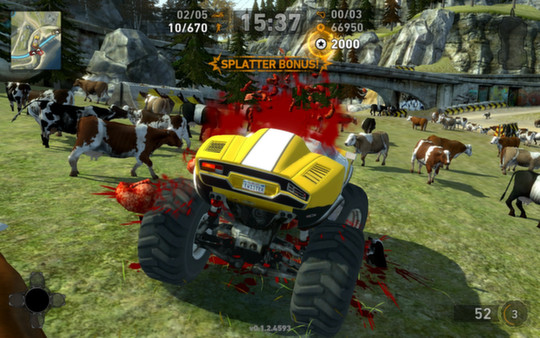 Once again, the game features a varied mix of adult pedestrians of all ages, shapes, persuasions and species (Carmageddon is an equal opportunities Ped Slaughterfest). Classic pedestrians are back, such as old lady on a Zimmer frame and old man with his stick, with their famous cry “I was in the war!”, plus bikini babes and swimming trunk hunks, fat bastards, and herds of cows in improbable locations. Joining them are some new faces – including the Stainless dev team and some guest appearances by the generous Kickstarter Backers who pledged their way into a VIP role in the game!

PowerUps are back (well, they couldn’t not appear in a game bearing the name Carmageddon, could they!) and this time they’re even funnier, surrealier, hurtier, and messier than ever! Lots of the classic PUps (as we call them) return in super-enhanced form, such as Repulsificators, Kangaroos & Solid Granites. Then we have all new PUps like “Pelvic Thrust” and a variety under the heading “Tossers”! Combine PUps to create hilarious combo results like “Groovin’ Helium Filled Peds”, or “Peds without legs at the Temporary Rapture”!