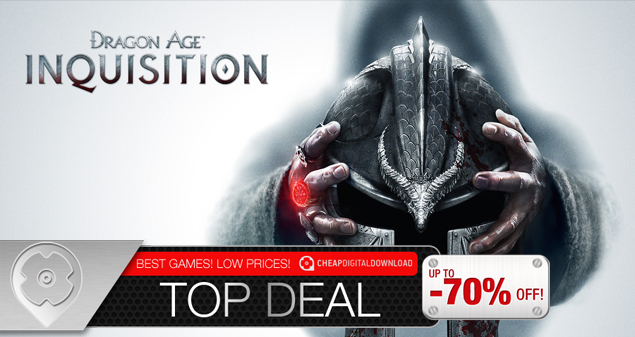 The epic role-playing series from BioWare takes a thrilling leap forward with the power of Frostbite 3. Beautiful vistas and incredible new possibilities await you. Ready yourself for Dragon Age: Inquisition.

A cataclysmic event plunges the land of Thedas into turmoil. Dragons darken the sky, casting a shadow over lands on the brink of chaos. Mages break into all-out war against the oppressive templars. Nations rise against one another. It falls to you and your allies to restore order as you lead the Inquisition and hunt down the agents of chaos.

BioWare’s latest action-adventure delivers an unparalleled story set in a vast, changeable landscape. Explore hidden caves, defeat truly monumental creatures, and shape the world around you based on your unique play style.

Explore, lead, and battle: Tough choices define your experience, and even one decision can change the course of what’s to come.

Become The Inquisitor – Wield the power of the Inquisition over the course of an epic character-driven story, and lead a perilous journey of discovery through the Dragon Age.

Bond With Legends – A cast of unique and memorable characters will develop dynamic relationships both with you and with each other.

Change the World – Your actions and choices will shape a multitude of story outcomes along with the tangible, physical aspects of the world itself.

Play Your Way – Completely control the appearance and abilities of your Inquisitor, party of followers, outposts, and strongholds. Decide the makeup of your Inquisition forces and your own style of combat.

Multiplayer Mode – You don’t have to face the enemies of Thedas alone; Dragon Age: Inquisition’s multiplayer mode allows you to join your friends in thrilling adventures against some of the world’s most monstrous foes. Choose between one of twelve unique characters, customize your Agent of the Inquisition with awesome loot, and prepare for action-packed encounters!