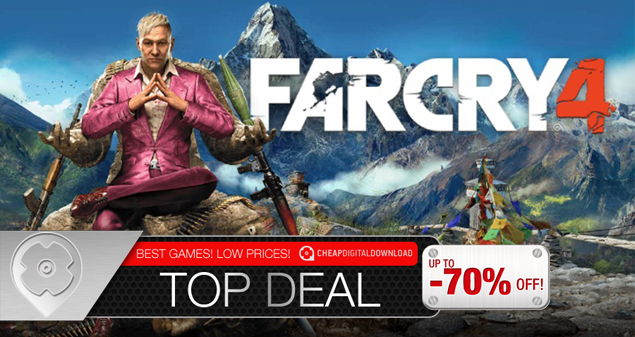 Far Cry 4 tells the story of Ajay Ghale, a young man returning to the country of his birth in the Himalayas to fulfill his mother’s last wish – to return to her homeland and scatter her ashes there. Ajay finds himself entangled in his family’s sttuggle in a rebellion against a self-appointed king called Pagan Min, and he must make choices to steer the Rebellion and The Golden Path towards the liberation of Kyrat.

• From leopards, rhinos, black eagles, and vicious honey badgers, Kyrat is home to abundant wildlife. As you embark on your hunt for resources, know that something may be hunting you…

• Scout enemy territory from above in the all-new gyrocopter and then plummet back to earth in your wing suit. Climb aboard the back of a six-ton elephant and unleash its raw power on your enemies.

• Choose the right weapon for the job, no matter how insane or unpredictable that job might be. With a diverse arsenal, you’ll be prepared for anything.

CO-OP: BRING A FRIEND! As not every journey should be taken alone, Far Cry 4 allows for a second player to drop in and drop out at any point, re-imagining the cooperative experience in the true spirit of Far Cry for the next generation. You’ll now be able to discover and explore the living open world of Kyrat together!

HIMALAYAN MISSIONS A trip to Kyrat wouldn’t be complete without a visit to the highest peaks of the Himalayas! Throughout the game, you will come across a series of missions located at the peaks of snowy mountains. The Himalayan missions will push you to extremes: encounter avalanches, ride snowmobiles and fight for each breath as you live the effects of high altitude! The wingsuit might be your only chance at survival…

SHANGRI-LA Kyrat is also a beautiful land deeply rooted in its rich mythology. Shangri-Là is a fabled place that is part of that folklore and has been sought after by mortals in the hopes of finding enlightenment. Presented as a parallel and esoteric universe, Shangri-Là is a place where you will transcend into the limitations of your own mind and go to a place where legends live. You’ll encounter a completely different set of mythical enemies with unexpected and surprising behaviors. You will have an ally, a noble white tiger, the protector of Shangri-Là. The tiger comes to your defense when provoked or can be sent to attack nearby enemies. The Shangri-Là bow, with the exclusive ability to momentary slow time, will also be available while players unlock skills within the main skill tree.