Top Deal | Lara Croft and the Temple of Osiris 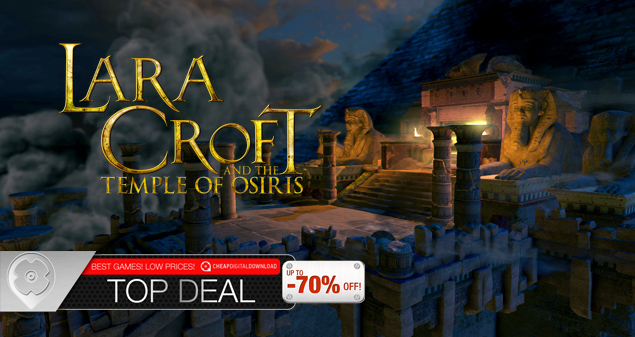 Battle evil gods and monsters of myth and legend in the sequel to the critically acclaimed Lara Croft and the Guardian of Light, Lara Croft and the Temple of Osiris. Taking place deep in the deserts of Egypt, Temple of Osiris brings us to another adventure with heroine Lara Croft along with her treasure hunting rival, Carter Bell. With evil god Set being unleashed and is about to enslave mankind, Lara teams up with Carter along with Horus and Isis (Osiris’ wife and son) to resurrect Osiris and remove the curse and stop Set’s evil deeds before it’s too late.

Critically Acclaimed Franchise Sequel to the award winning Lara Croft and the Guardian of Light, one of the best-selling digital titles of all time.

All-New Adventure Lara must overcome deadly traps and forsaken gods to uncover the missing pieces of Osiris and change her fate.

Classic Arcade Action First ever 4 player co-op multiplayer experience featuring Lara Croft. Have your friends play as Carter, Isis, and Horus while you play as Lara in the fully cooperative story mode – both offline and online supported.

Competitive Co-op Compete against your friends with seamless drop-in/drop-out co-op to earn bigger rewards, treasures, and powerful artifacts to boost your character. Will you work together or will you sacrifice your friends for a higher score?

i play lara croft all parts, but this is the best, i’ll buy it.