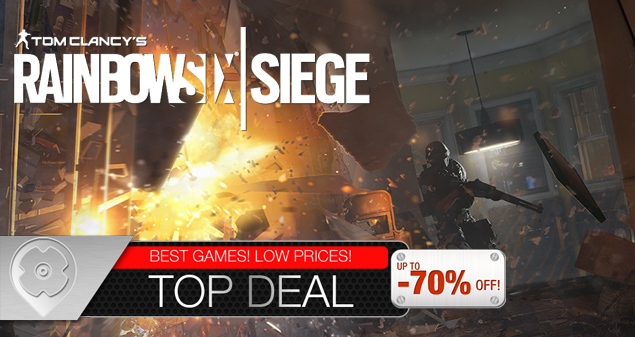 Tom Clancy’s Rainbow Six: Siege is an upcoming first-person shooter video game under development by Ubisoft Montreal, and to be published by Ubisoft. Siege is one of the best FPS games we’ve seen since its introduction during the recently concluded E3,  and it is here to take FPS gaming to a whole new level!

Siege keeps the spirit of the Tom Clancy series while trying to set a whole new standard to FPS games. It is beautiful, vivid and very REALISTIC! Yes, it’s realism is over the top. The environment is amazing, the graphics are topnotch, and the movements are so fluid, it just takes your breath away. There are major differences from the older versions of the game, featuring a heavy multiplayer focus and destructible environment.

It is highly tactical and finely tuned. This game is definitely going to break all the rules of the first-person shooters you’ve come to know.

THE SIEGE GAMEPLAY BREACH ENEMY STRONGHOLDS WITH NEW TACTICAL MEASURES OR FORTIFY YOUR OWN WITH DEFENSIVE RESOURCES IN BOTH SIDES OF SIEGES, A BRAND-NEW MODE OF ASSAULT COMBAT FOR THE RAINBOW SIX SERIES.

PROCEDURAL DESTRUCTION CHANGE THE LANDSCAPE OF YOUR ASSAULT WITH AN UNPRECEDENTED LEVEL OF ENVIRONMENTAL DESTRUCTION. WALLS CAN BE SHATTERED, AND FLOORS AND CEILINGS CAN BE BREACHED. MASTERING THE ELEMENT OF DESTRUCTION IS THE KEY TO VICTORY.