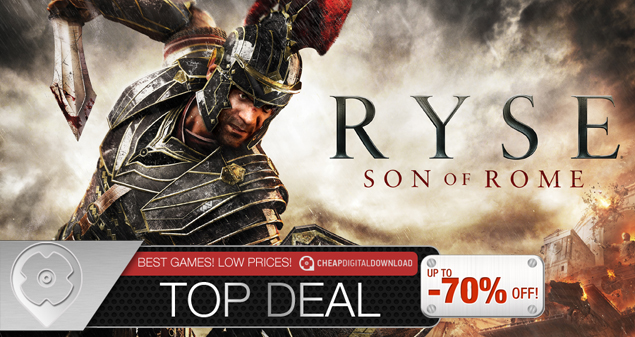 Heroes and traitors. Just some of the things you’ll find in Ryse: Son of Rome. Set during the rule of the Roman Empire, you’ll get to play the game as Marius Titus, a Roman soldier whose family is brutally murdered by barbarians. And to top it all off, he witnessed it himself. Now it’s up to you (and divine intervention) to figure out how you can help Marius rise through the ranks, set on a journey to Britannia to avenge his dead family, and fulfill his destiny as a leader of men.

FEAST YOUR EYES – Ryse: Son of Rome takes full advantage of your PC’s power, and gives you the freedom to choose how you experience the heat of battle.

*4K resolution support makes for incredibly rich detail in textures and shading to bring every aspect of the world to life in jaw-dropping style.

*Customize your experience – embrace the power of your PC and tweak the graphics options to strike the perfect balance between performance and visual detail.

*Native desktop resolution UI support in full-screen means the UI always looks crisp, no matter what resolution you choose to play the game in.

Features The complete Ryse experience The PC version of “Ryse: Son of Rome” offers the full experience, bundling the original Xbox One launch hit with all its DLC. Taking full advantage of the PC 4K gaming is another leap in graphics quality for PC gamers and Ryse is the perfect showcase for what’s now possible in high-end PC games. “Ryse: Son of Rome” leverages the power of Crytek’s CRYENGINE and the latest High-End PC gaming technology to present conflict in the Roman Empire like you’ve never seen it before. Next-generation cinematic immersion Marius’ tale of revenge comes to life through new advancements in performance capture, allowing players to interact with believably realistic characters Brutally intense combat “Ryse: Son of Rome” delivers a visceral, brutally realistic combat experience with epic-scale battles. Relive the ruthless history of ancient Rome as you engage in raw close-quarters combat against the barbarian hordes. Cooperative gladiatorial combat in the Colosseum Colosseum Mode, plunges you into the Arena to fight alongside a friend against an ever-changing array of enemies and challenges, to the roar of thousands of spectators. A dynamic battlefield Colosseum Mode includes 26 multiplayer maps, with tile sets ranging from British camps to Roman villas and Egyptian deserts. Forge your own Legend You decide your destiny, customizing your gladiator through gold and Valor (XP) with new armor, weapons, shields, and consumables to win the crowd and survive in the arena. Bonus Content “Ryse: Son of Rome” for PC will come with all bonus material originally released as downloadable content for the Xbox One version, including: • The Colosseum Pack containing two character skins and two Arena maps. • The Mars’ Chosen Pack containing one new character skin, four Arena maps, and the new Survival mode. • The Duel of Fates Pack containing two character skins, two Arena maps, and one additional Survival map. • The Morituri Pack, with three new Arena maps, two Survival maps, and five solo Arena maps.