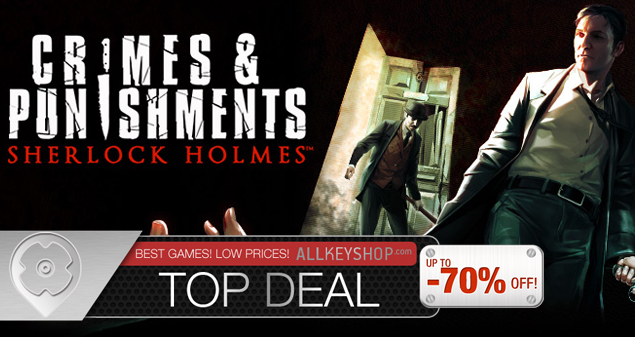 Enter the world of and become the greatest detective of all time, Sherlock Holmes, with Crimes & Punishments. This game has got just the right mix of various high-profile cases such as murders, thefts, and disappearances – enough to keep you engrossed all throughout the game. Crimes & Punishments includes 10 different endings for each of the cases, and this will depend on the choices you will make. Your decisions will also greatly affect your reputation as top detective.

“10 DIFFERENT ENDINGS FOR EACH OF THE GREAT CASES” – Each case will offer a large degree of freedom to make moral choices that go beyond merely seeing that justice is done. Your decisions will have a real influence on the game both in terms of your character’s reputation and the consequences that arise in a realistic and sometimes unexpected way. You should therefore be aware of the gravity of your choices and decisions throughout the game, because “Crimes & Punishments” has an intriguing system of actions/consequences that will force you to weigh everything up very carefully before acting, and therefore lends an interesting depth to all your decisions.

Our aim is therefore to offer you a unique experience, and “Crimes & Punishments” has up to 10 different endings for each of the great cases in the game.

“THE RENDERING IN CRIMES & PUNISHMENTS IS ALSO MUCH RICHER, MORE IMMERSIVE AND DETAILED” – The change of game engine has not only improved the graphics; the new engine has also allowed us to develop new investigation techniques that would not have been possible with the previous engine. Crimes & Punishments can now offer 14 investigation mechanics that convey the feeling of BEING Sherlock Holmes and exploiting the incredible gifts and talents for which he is renowned

“A MORE MODERN CHARACTER” –  In “Crimes & Punishments” you can enjoy playing a Sherlock Holmes who is very different to the one featured in the series up to now. Development studios Frogwares have in fact somewhat discarded the “traditional” Sherlock Holmes based on the films of the ‘60s for a more modern character who chimes in perfectly with the new artistic and technical ambitions of the title.

“14 GAMEPLAY MECHANICS” – From the opening of each of the six investigations in the game up to the arrest of the culprits and the moral choices faced by the players, the new game mechanics convey what it feels like to actually BE Sherlock Holmes. The mechanics will enable you to exploit the incredible gifts and talents of Sherlock Holmes, the investigator, such as his ability to learn the details of an individual’s life simply by observing them, or to imagine and reconstruct a past event by merely studying the key features of a crime scene.

“USE YOUR TALENTS TO UNEARTH CLUES” – Use your talents to unearth clues that would be invisible to the untrained eye: fingerprints, dust marks, dried blood on the corner of a plank of wood… be aware of the slightest sound like, for example, the faint ticking of a device hidden in the room that could lead you to fresh clues. Finally, Sherlock Holmes’s sense of smell will be an extra weapon to use in your enquiries: the smell of ash or cigar smoke may tell you a great deal about recent events that have taken place at crime scenes.

“YOUR CHOICES WILL HAVE REPERCUSSIONS” – The morality ranking then tells us something about your personality! Have you carried out the letter of the law, or have you shown compassion? The choice is yours. You can play each case again as many times as you like to improve your score and reputation, and to find a range of possible conclusions to the investigations.

Bear in mind that your choices will have repercussions on the way people interact with you. Don’t expect people to be well-disposed towards you if it becomes known that you conducted the investigation in a less than professional manner and sent an innocent person to jail!