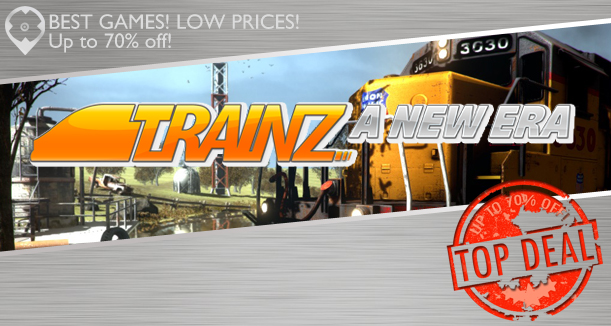 Trainz: A New Era is the most realistic and most beautiful game in the series. It completely revamps the Trainz series, and takes the train simulation genre to new heights. It is equipped with next gen graphics because of the all-new graphics engine and involves advanced physics to simulate a realistic feel. It brings historic and modern routes to life in eye-watering realism. You can operate famous locomotives, explore fascinating routes and unleash your creative side designing and building your own routes and Driver Sessions!

Trainz: A New Era will provide even modest train-fans with hundreds of hours gameplay in single and multiplayer mode. Explore the world of today, travel back in time to relive the glory days of railroad history, or create your own rail world to explore and share with others.

Share your enthusiasm with other rail fans and combine your efforts with others to operate a working rail line!

Our most accurate simulation yet with real time world physics and editing tools! 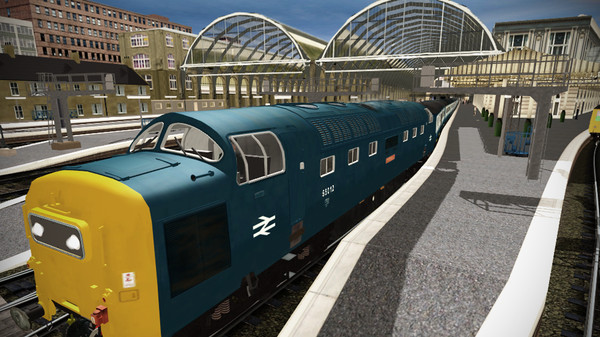 Calculated at 30 times a second, our physics use a variety of configurable inputs such as engine powers, train weight and rolling resistance whilst taking into account factors like track gradient, curve resistance and track adhesion for each train car when accelerating or decelerating. The brand new real time physics editing tools allow players to tune physics ‘on-the-fly’ to take their simulation’s performance even further.

Brand-new Real-time Physics Editing tools enable users to enter known specifications to accurately monitor all the forces at work. Things like tractive effort, drawbar pull or brake pipe pressure can be monitored at a specific point along the train and input values adjusted “on-the-fly”. By analysing and tuning performance without leaving the simulation, real-world train characteristics can be matched perfectly. (It’s a bit like running a virtual dynamometer car).

If physics aren’t your thing, don’t worry. You can leave the fine-tuning of your favourite locomotive’s performance to the experts whilst still having the choice between ‘Realistic Mode’ or ‘Easy Mode’ driving options.

An updated set of track laying tools are provided in Surveyor to automatically adds frogs/vee, blades, and checkrails in the correct place on the tracks when making a switch, turnout or junction. The blades then animate as the junction direction is changed. 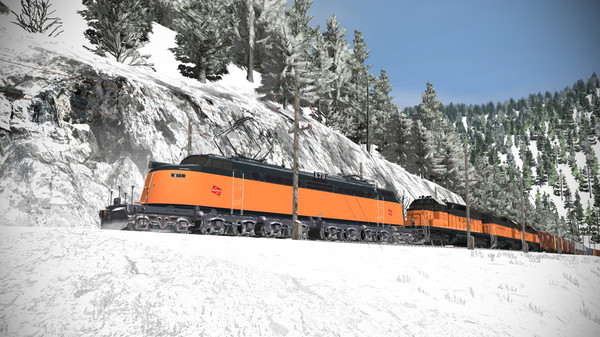 New particle effects and collision systems will prevent rain penetrating a tunnel, smoke will billow out from the underside of a bridge or the top of a tunnel and all particle effects will change velocity, direction and flow more naturally.

Trainz: A New Era provides a variety of high quality routes – both built-in to the core edition or available as Downloadable Content.

Kickstarter County – Based upon the famous Highland Valley route from the early days of Trainz, Kickstarter County has received a huge upgrade with new content, new track and new industries. This route is a tribute to all our Kickstarter Backers who helped make Trainz A New Era possible and includes a range of customized assets dedicated to our keenest supporters.

ECML Kings Cross – Edinburgh (UK, 1976) – This edition delivers the full route from London Kings Cross Station all the way to Edinburgh in Scotland – a 393 mile drive! With significant updates to almost every feature along the track, the route will take you back in time to relive the diesel and electrification as it was in 1976 UK.

Healesville – (Australia, 1910’s) – A faithful recreation of the towns, stations, bridges and rural countryside of 1915 Australia. The line includes many notable features including the 1.6 mile long timber trestle bridge over the Yarra River and flood plains between Yering and Yarra Glen and one of the very few tunnels on the Victorian Railways (at the top of the ‘Tunnel Hill’ grade between Tarrawarra and Healesville).

Avery – Drexel – (United States, 1970’s) – Deluxe Edition – The Milwaukee Road route runs from the end of the electrification in Avery, across the Bitterroot mountains via the St Paul Pass, and all the way to the crew-change point at Alberton. It features Little Joe EF4 electrics and a huge range of seasonal rolling stock, plus both a full summer and winter season version of the route.

Warwick to Wallangarra – (Australia 1990’s) – Deluxe Edition – Follow the QR Southern railway line through the Darling Downs and into Granite country, right to the border with New South Wales.

Season Town Northern Rail Road – (East or Middle West USA) – Deluxe Edition – The Season Town Northern Rail Road (STNRR) is based in fictional “Season Town” situated somewhere in the East or Middle West of the USA. The aptly named Season Town supports season change functionality, so control the weather and see how the route responds to snow! The layout provides a short mainline section as well as a 6 mile branch line connecting a limestone mine with a cement plant, as well as a streetcar network consisting of four branches.

The BiDye Traction Railroad – (Someone’s Garage) – Deluxe Edition – The BiDye Traction Railroad shows off the versatility of Trainz: A New Era by creating a virtual model railroad for you to explore and enjoy. Built in a large garage in much less time and at a fraction of the cost of the “real thing”, Bidye highlights how Trainz can be used by model train fans as well as prototypical fans.

I love trains, so i think i will enjoj in this game 😀