The Torchlight 3 Story Campaign is unsatisfactory as fans pointed out. The game is currently available on Steam Early Access and has a rating of Mixed as of this writing.

Torchlight 3 is from the creators of Diablo 2 which means that they are no strangers to the ARPG genre. You will better understand this statement with Jason Rodriguez of pcinvasion.com when he said, “Is there a story? There might be, but I found it hard to care about the whole thing. You’re basically given a quest, then a location, then a mini-dungeon, followed by a quick boss fight. After that, you go back to town to finish your task and you get a new quest to repeat the whole process.”

If you think about it, the game lacking a definite story won’t be surprising when you look back at it changing so many things during its development. At first, the game was announced to be a free-to-play MMOARPG however it received backlash from the fans saying that the game is terrible.

Tyler Thompson the co-lead of the game told eurogamer.net that, “This game is not recognizably similar to the thing we had 18 months ago, and that’s largely due to our fans telling us, ‘That thing you tried is bad. You could do better over here.’ And us actually being willing to go, ‘You know what? Let’s reconsider.’”

From the free-to-play scheme to a premium scheme, the game also changed names from Torchlight Frontiers to Torchlight 3. There had also been a whole rework of enemy respawns in order to stretch content. This made the game a “run here, do that, repeat” kind of game which made the story and content lacking. Although the game has shifted from its previous free-to-play scheme, the mechanics sadly remain. 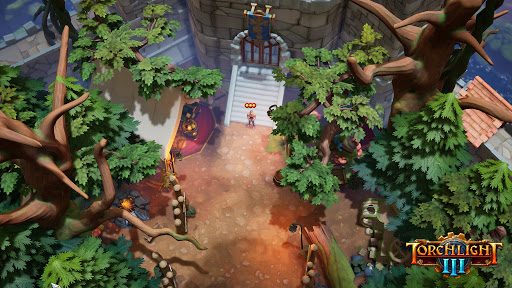 The developers are actually aware of all these with Echtra’s CEO and Founder Max Schaefer posting on the game’s Steam page acknowledging complaints but also they are looking for ways to fix them.

He said, “Sometimes it was a bitter pill for us to take, and sometimes we thought “well of course we should do that!”. In all cases, it will make our game better. It is at a time like this that I am thankful that we created a flexible game architecture that allows us to make profound changes in a relatively short amount of time. You’re about to get the first taste.”

The game’s first major patch is set to launch next week. The patch will come with Act 3 which is set in the Echonok mountains. These mountains had been described as Ian Boudreau of pcgamesn.com as:

Echonok is a mountainous region that is the home to the underground ruins of an ancient dwarven civilization. They were masters of the engineering craft, and build complex stone and metal machines powered by ember. While the dwarves themselves are long gone, the steam-powered automata they created to guard their homes remain on watch. Without anyone in charge to tell them otherwise, they wander around making sure the gold-clad halls remain free of riff-raff such as you and your party members.

Right now there really isn’t anything much to say about the game’s story campaign (or the lack of it) but do keep in mind that the game is only in Early Access and a lot could change once the game officially launches especially when the developers are looking into the complaints said about the game.