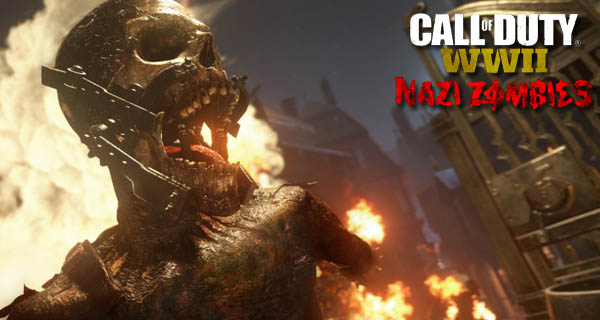 Activision and Sledgehammer Games recently released the Call of Duty WWII Nazi Zombies Trailer. The reveal was made in the Comic-Con held San Diego, California a couple of days ago.

Call of Duty WWII Nazi Zombies trailer is the zombie mode for the game that offers a multiplayer coop. The trailer is scary, surely this is going to be an amazing mode. The official description of the mode reads as: “ Players will embark on a chilling and mysterious journey through a snowy Bavarian village in Mittleburg, Germany, as they attempt to recover priceless works of art stolen by the Axis powers in World War II. This is village holds a shadowy secret key to an unimaginable and monstrous power. Nothing is as it seems in this zombie horror as a dark and sinister plot unfolds to unleash an invincible Nazi Army of the dead.”

The video features two minutes of terror. It brings you to a laboratory-like-location where the zombies are being created. “I have built more than just a new kind of soldier, I have created the devil himself.” Prepare to be scared out of your wit’s end, watch the Call of Duty WWII Nazi Zombies trailer below:

Pre order Call of Duty WWII and get the Beta Access for PC running through August 25-28 and PlayStation 4 and Xbox One on September 1-4. The game officially launches on November 2, 2017, on all platforms.